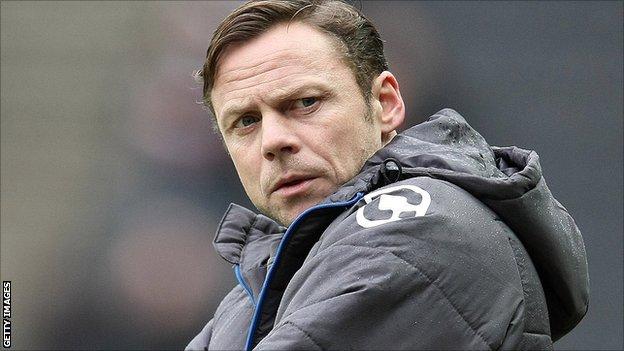 Manager Paul Dickov has said he was pleased to see his players take control of the situation when Oldham were awarded a late penalty at Wycombe.

With regular spot-kick taker Shefki Kuqi off the field, Robbie Simpson stepped up to level the scores at 2-2.

"When you're on the sidelines, you can't affect what happens on the pitch sometimes. You look for players to take responsibility and Robbie did that."

The former Manchester City and Leicester striker continued: "[Assistant manager] Gerry Taggart asked me who was taking the penalty and I said I hoped it was Robbie.

To hit it with the composure and the connection that he did was fantastic, especially at that stage of the game.

"It was a big goal for us because we knew the importance of getting a result. If Wycombe had beaten us, they would have been right on our tails."

The point at Adams Park keeps Oldham six points above the League One relegation zone, a gap that would have been closed to three points if Wycombe had held on for victory.

Four points from the remaining three matches against Preston, Bury and Carlisle will be enough to guarantee another season of League One football at Boundary Park.