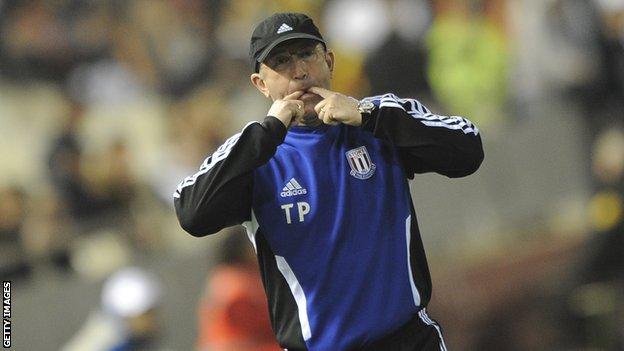 Tony Pulis has called on Stoke City's hierarchy not to lose focus on the first team after they announced a £6m investment in youth facilities.

Pulis believes that on-field progress is as important as investing in future talent, and will tell chairman Peter Coates that at the end of the season.

"We must not forget the front of the house," Pulis told BBC Radio Stoke.

"The football club should never ever be pushed to one side. It's very important that we keep pushing on the pitch."

He added: "Let's not forget everything that has taken place at the club is because the team has been successful in the Premier League. We cannot allow that to drop off.

"It's finding the right balance."

On top of the initial £6m outlay, Stoke would have to provide a further £2.325m in funding per year as they aim for Category One status under the new Elite Player Performance Plan.

The club will also have to employ 18 full-time staff in order to be granted extra coaching time with young players.

The Potters have already promoted players such as Andy Wilkinson and Ryan Shotton to the first team in recent seasons, but Pulis hopes there will still be financial backing for transfer targets and wages.

"There's nothing better than having a Wilkinson or a Shotton in your team, but to do that we need to maintain the growth and the progress this football club is making," he added.