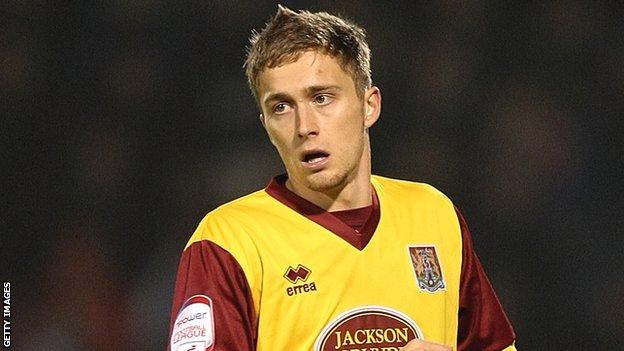 Northampton striker Jake Robinson says he hopes to end a frustrating season with performances to suggest a more positive future with the club.

The 25-year-old has not scored for the Cobblers since joining them last summer and made his first start since February in Saturday's 3-1 loss to Bradford.

Robinson told BBC Northampton: "It's been probably my most disappointing season as a professional.

"I'm hoping in the last four games to show what I've got to offer."

He continued: "Once I get that first goal, I'm sure they will flow."

Robinson scored nine goals for Shrewsbury last season and a further seven during a loan spell with Torquay.

He was signed on a two-year deal by former Cobblers boss Gary Johnson and current manager Aidy Boothroyd is keen to see what he can do in the remaining games this season.

"He's been unfortunate because of the form of Michael Jacobs, Toni Silva and Adebayo Akinfenwa scoring," said Boothroyd.

"It's up to players that are here next year to show me that they want to be in the team next year. He's one of those players.

"He can say he hasn't had the run of games that he needs and he might be quite fair to say that. He might just get them now [and] he'll show what he's all about.

"There's no doubt of his qualities and I don't think the Northampton public have seen the best of him. I watch him in training and see him do things that a lot of other players can't do.

"It's important that he [goes] from being a training ground player to being a match player," Boothroyd added.