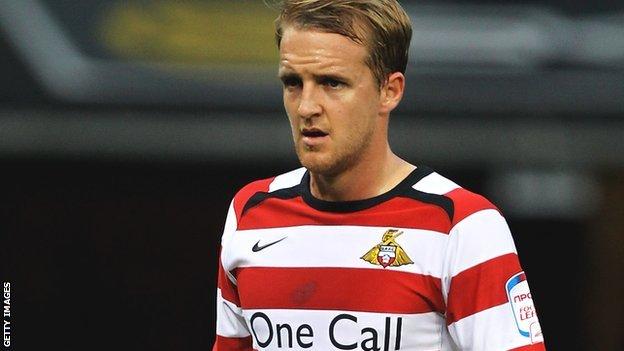 Doncaster Rovers midfielder James Coppinger says the lack of continuity at the club may have contributed towards their relegation.

Rovers went down on Saturday having used 40 players in the league campaign after their tie-in with Willie McKay.

"Players have come in with different agendas and everyone's got different things in their minds," Coppinger told BBC Radio Sheffield.

"If you look at the best teams they have a constant spine and stick to it."

He added: "We've not had that this season, we've had players coming in on short-term deals and players have been injured.

"In any team you have to have consistency and we haven't had that and it shows because we're bottom of the league."

The former Newcastle United man is now worried the club could slide back down the leagues unless preventative measures are taken.

He continued: "We've been here for four seasons and I don't think any of us envisaged us going down.

"The chairman and manager need to get together and work out a plan to stabilise the club so we don't just dwindle through the leagues.

"This club means a lot to me and they've made me one of their own, this season has been a bit of an emotional rollercoaster."