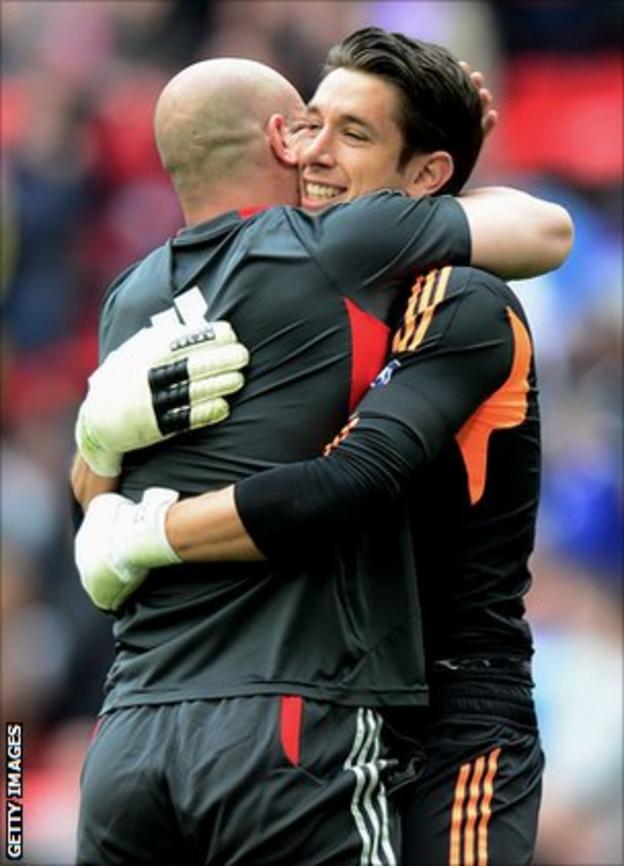 Brad Jones is hoping he has played a small part in helping Liverpool to win the FA Cup this season.

With Pepe Reina and Alexander Doni both suspended, third-choice goalkeeper Jones played in the semi-final win against Everton at Wembley on Saturday.

"It's a brilliant feeling to come to Wembley, be a Liverpool player and get a win," he told BBC Radio Merseyside.

"I'm just glad that I can be a part of this season. Hopefully the boys can go out there and win another trophy."

Liverpool fell behind early to a goal from Everton's Nikica Jelavic, but second-half strikes from Luis Suarez and Andy Carroll gave Kenny Dalglish's side victory over their Merseyside rivals.

The Reds will look to add the FA Cup to their earlier Carling Cup success when they face Chelsea in the final on 5 May.

Jones, 30, was making only his fourth appearance for Liverpool since moving to Anfield in the summer of 2010.

"As a goalkeeper, the downside is that you don't get the chance very often, but when you do, you've got to be ready," said the former Middlesbrough stopper.

"It's been difficult but you've got to cope with it, go out there and do your best."

Jones added that his son Luca, who died after a battle with leukaemia in November, had been a big inspiration for him on the day.

"He was on my mind for the whole game," said the Australia international. "He was my biggest fan and always proud of me.

"The Liverpool fans have been unbelievable. I'm not the most important player at the club but they treat me really well and I can't thank them enough. It shows the sort of club Liverpool is."