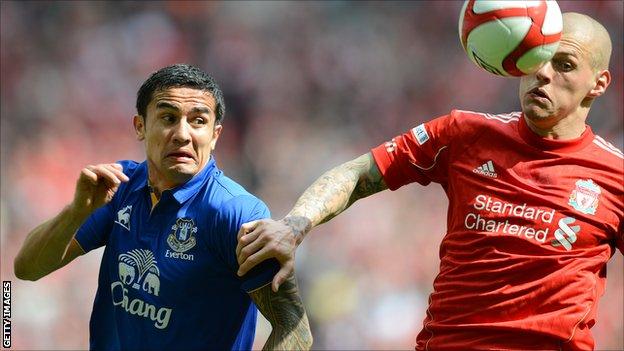 Tim Cahill has said Everton's players are desperately disappointed to have missed out on a second FA Cup final appearance in four seasons.

The Toffees were beaten 2-1 by Merseyside rivals Liverpool in their semi-final at Wembley on Saturday.

"There are no words to express how sad we are for the fans," the 32-year-old midfielder told BBC Radio Merseyside.

"We're very proud and we really hold this club in high esteem as players. The main thing is to stay confident."

The Australia international, who played in Everton's 2009 FA Cup final defeat by Chelsea and also appeared for Millwall in their 2004 loss to United at the Millennium Stadium, continued: "We need to be positive for the rest of the season.

"I wouldn't change this group of lads for anyone because we'll do anything that we can for each other.

"We've got to pick ourselves up and see what we can do next week against Manchester United."

David Moyes' side are seventh in the Premier League table, one point and one place above Liverpool, with both clubs having five matches left to play.