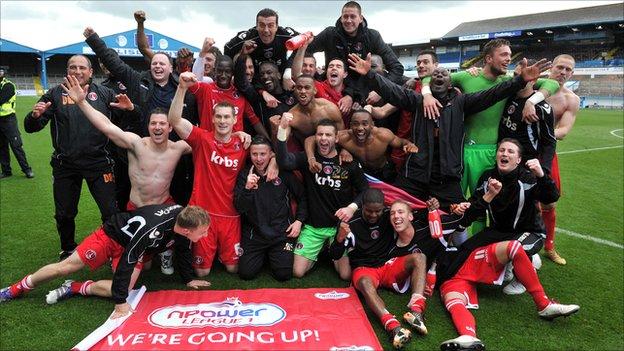 The Cumbrians remain a point outside the play-offs despite Saturday's 1-0 home defeat that sealed the Addicks' return to the Championship.

"I don't like seeing them celebrate and us have nothing to go at," Abbott told BBC Radio Cumbria.

"I'm going to drive on until we're part of that and we get our own success."

He added: "I don't like getting beaten. I can't wait to get away from here because there is an enviousness and a jealousness, although I'm pleased for Chris [Powell] and his players - don't get me wrong."

Powell's side have led the League One table since mid-September, and invested in 14 signings this season such as Jason Euell, Danny Haynes and Leon Clarke, adding to loanees such as Lee Cook and Dany N'Guessan.

In contrast Carlisle have made only four permanent signings, with Jordan Cook loaned from Sunderland, highlighting the gulf in resources between the two clubs.

"They flew up, they have got assistant physios, assistant kitmen, assistant everything, and we have got just an honest group of players and resources win the day," Abbott added.

"We just couldn't quite match them or find the goal to give us that slight advantage that we might have been able to defend.

"Fair play to Charlton, it is a very, very good side and that is what you get when you pay a lot of money."