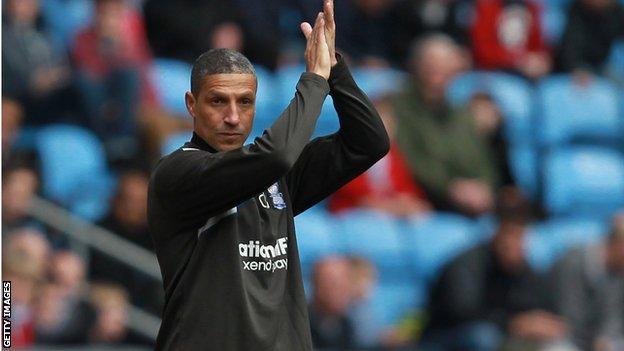 Birmingham City manager Chris Hughton believes his side should not worry about fatigue as they make a final push for a Championship play-off place.

The Blues have already played 57 matches this season but could seal their spot in the top six on Tuesday.

To do so, they would have to beat Ipswich and hope Middlesbrough lose to already-relegated Doncaster.

"There's no bigger incentive for the players to want to do well and get the results that we need," he told BBC WM.

"So at this stage of the season you can't be worried."

Hughton continued: "By our form this season, we deserve to be where we are now, but it's not about now, it's about 28 April and making sure we get enough points to be in the top six."

After Ipswich on Tuesday, the Blues will go to Brighton on Saturday before facing a final-day showdown with current league leaders Reading.

The squad includes the likes of Stephen Carr, Steve Caldwell and Marlon King and Hughton is convinced their experience, and that of other senior players, will play a part in their remaining games.

"We've got a lot of experience in the squad, but it will be down to a number of factors.

"It will be down to injuries, fortune, experience, quality. We're at that stage of the season now when everybody's got to push," Hughton said.

But Birmingham will be without goalkeeper Boaz Myhill, who injured his thumb in the warm-up before Saturday's 2-2 draw with Bristol City.

"We'll find out the extent of the injury over the next few days.

"We can't afford to bring him back too early and for him not to be 100% right," added Hughton, who has recalled goalkeeper Jack Butland from his loan spell at League Two Cheltenham.

He also confirmed that Keith Fahey and Jonathan Spector will miss the game at Portman Road, while Jordan Mutch faces a late fitness test.