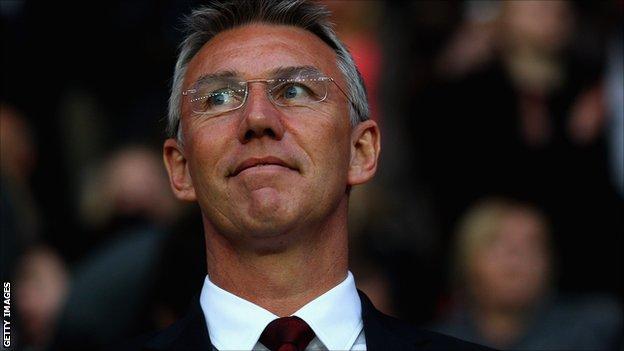 Southampton manager Nigel Adkins says he has not given up on winning the Championship despite Friday's defeat by promotion-rivals Reading.

Saints travel to Peterborough on Tuesday and are three points behind leaders Reading with three to play.

"The objective is to win the division, alright Reading have gone three points ahead," Adkins told BBC Radio Solent.

"We've got a game on Tuesday as have Reading. Who knows what will happen after that?"

Reading host Nottingham Forest on Tuesday and could earn promotion if results go their way elsewhere.

But Adkins says he is just focused on what his side have to do.

"We play good football and have done ever-so well," he said.

"Let's focus on the next game, Peterborough - we are looking forward to it.

"If we win that game it gives us another three points and then we get ourselves ready for the next game after that.

"We've proven already this season that we can respond if we get an adverse result, that we can go again for the next one.

"So we've got a lot of confidence in the players we've got, we work very hard for each other and we are looking forward to this exciting part of the season."