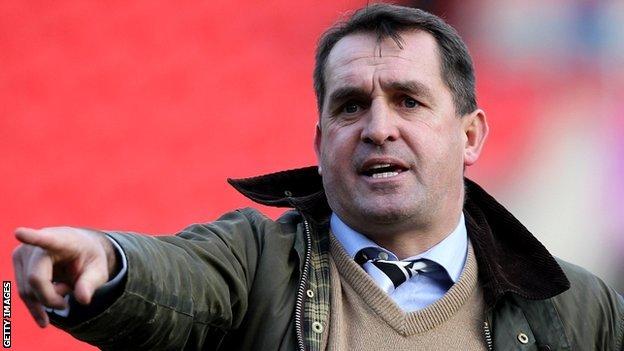 Martin Allen has replaced Lawrie Sanchez as manager of Barnet with immediate effect.

The Bees, who have won just once in their last 16 matches, are just three points above the League Two drop zone.

Former Northern Ireland and Fulham boss Sanchez, 52, was appointed as Barnet boss in May last year after Allen left Underhill to take over at Notts County.

In a statement Sanchez accused Barnet of a "lack of loyalty" and of "losing their nerve".

He said: "Following the termination of my contract by Barnet FC, I'd like to express my extreme disappointment at the lack of loyalty shown in me by the club.

"It is the same lack of loyalty the club accused Martin Allen of showing when he walked out on Barnet towards the end of last season.

"When I took over from Martin, the club were three points adrift of safety with just four games of the season left and under serious threat of relegation to the Conference.

"However, thanks to a fantastic effort from the players, staff and myself, Barnet took seven points from those last four games and avoided relegation.

"Now, exactly a year since my appointment, the club are three points clear off the relegation zone with three games to go.

"I certainly felt that recent performances would see the club remain clear of the threat of relegation.

"Unfortunately, that confidence seems not to have been mirrored in the boardroom and I am disappointed the club have lost their nerve at such a vital stage of the season."

Allen, who has had two previous spells in charge at Underhill, began his managerial career at Barnet in March 2003, when they were in the Conference, and left a year later to join Brentford, before having spells with MK Dons, Leicester and Cheltenham.

He returned to Underhill in March last year but only stayed in charge for three games, before joining Notts County, who then sacked him in February.

Sanchez took over as a consultant for the last four games of the season, winning two matches and drawing one to help the London side avoid League Two relegation.

But the side have struggled this season, and Allen now has just three games - against Southend, AFC Wimbledon and Burton - to secure the side's Football League survival.