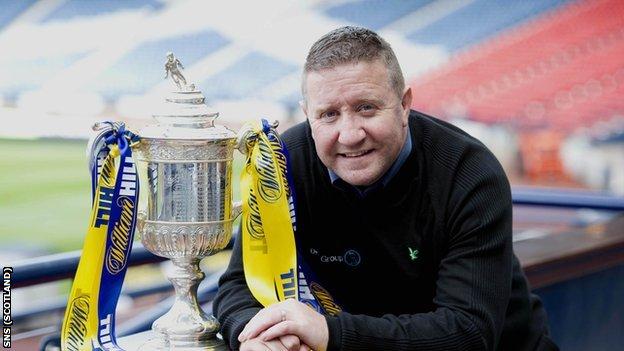 Former Hearts and Hibernian stars John Robertson and Craig Paterson agree the Scottish Cup final will be a thrilling, historic occasion for both clubs.

The Edinburgh rivals won weekend semis at Hampden to set up the May showpiece for the first time since 1896.

"We are talking about a unique fixture that nobody alive has ever seen," said Tynecastle favourite Robertson.

And ex-Hibs defender Paterson told BBC Scotland: "What a chance for these lads to go and make a name for themselves."

When the teams met at Logie Green in that 19th century final, Hearts were 3-1 victors.

Robertson and Paterson acknowledge that the men in maroon have had the upper hand in more recent years but believe the pressure makes the result hard to call.

"We do get excited about the derby games and the banter that goes about, but this really is a winner-takes-all scenario," said Robertson, a prolific scorer for Hearts in the 1980s and '90s.

"It's a chance for Hearts to continue the dominance of a fixture they have had for 30 years now.

"And for Hibs it has been 110 years since they last won the trophy.

"The excitement, the passion, the fear - they will all be there.

"It throws up a tremendous rivalry and there will be real splits in the Edinburgh community."

Paterson won the Scottish Cup with Motherwell in 1991 but had no such success in his spell at Easter Road from 1979-1982.

Hibs first lifted football's oldest trophy in the 1887 final but since their 1902 success they have lost eight finals.

"Hearts have been in charge for the last few derbies, so surely the law of averages has to be on Hibs' side," he reasoned.

"It's got to happen sometime and this would be a spectacular way to end that run of misery in cup finals.

"Hearts will go in as favourites but can Hibs pull this off? Of course they can.

"Cup football produces more shocks than any other kind."

For Robertson and Paterson, the players' dreams of earning legendary status contrasts dramatically with the enormity of losing the 19 May match.

"If I could guarantee that Hearts will definitely win the cup final, I'd take it in a minute," said the Hearts man.

"For whoever wins it will be the best bragging rights ever.

"For one set of fans it will be the greatest day of their lives.

"For the losers, it will be the toughest of results to take."

Paterson recalled unsuccessful attempts made by Hibs' championship-winning sides of the 1950s, Eddie Turnbull's "fantastic" team in the early '70s and the Leith outfit's eventual defeat to Rangers after two replays in the 1979 final.

He said: "What a chance for these lads to get themselves in the history books as one of Hibs' legendary sides."

"It couldn't be better. If you're going to do it after such a long time the ideal way would be against your greatest rivals.

"But losing to them is the sorest way."