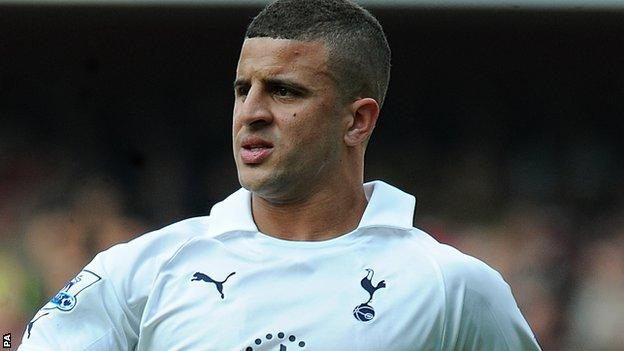 Tottenham and England defender Kyle Walker has been named PFA Young Player of the Year.

"I was a bit surprised because defenders don't normally get these awards and get the limelight as much as the centre-forwards," he said.

"It is a great honour to get the award and hopefully there is more to come."

Walker has been a regular for Tottenham this season, starting 33 of their 34 Premier League matches.

"It is always an honour to be selected by the people you play against and hopefully I can get a few more of these and some medals with Tottenham along the way."

His form earned him his first full international cap in November as he made his debut as a late substitute in England's 1-0 win over Spain at Wembley.

He made his first start three days later as England beat Sweden by the same scoreline.

Preston North End defender Graham Alexander received the PFA Merit award at the ceremony in London in recognition of his services to the game, dating back to his debut as a Scunthorpe player in 1991.

The 40-year-old went on to play for Luton, Preston and Burnley before returning to Deepdale in 2011.

In 2011, he became only the second outfield player in English football history to make more than 1,000 professional appearances.

"To get recognition for what you have done in your career at any stage is great," he said. "I'm coming towards the end of my playing career and I'm privileged to be recognised by the people who I have played against for the last 20-odd years."

Sheffield United striker Ched Evans, who was jailed for five years on Friday after being convicted of rape, was named in the League One team.

The deadline for voting in the awards is mid-March.