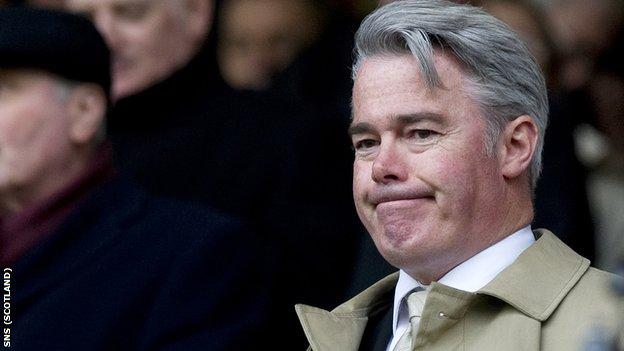 The Blue Knights consortium seeking to gain control of Rangers says it is "stepping back" from the process.

The group led by former club director Paul Murray had tabled one of three bids being considered by the club's administrators, Duff & Phelps.

The Blue Knights anticipated being named preferred bidder on Friday and was asked to provide a £500,000 non-refundable deposit for exclusivity.

But the group now says it cannot compete with Bill Ng's consortium.

American businessman Bill Miller has also been vying for control of the Ibrox club.

Duff & Phelps says it is disappointed by the withdrawal of the Blue Knights and insist that its bid had placed it in "a strong position".

At all stages of the process, The Blue Knights/Ticketus bid has been given the most serious consideration, particularly due to the fact that it was being encouraged by supporters' groups

Ticketus, the firm whose money financed Craig Whyte's takeover, with funding set against revenue from future season ticket sales at Ibrox, has been working alongside the Blue Knights but has also opened talks with Ng.

And the Blue Knights claim its Singapore-based rival had made the offer of a "substantially" better deal.

"We have been speaking to both groups," Ticketus told BBC Scotland. "Those discussions are ongoing and ultimately we are willing to work with whoever the administrator decides has made the best offer for the club and the creditors."

A statement from the Blue Knights read: "On the evening of 12 April The Blue Knights Consortium ["the consortium"] was asked by Duff & Phelps to reconfirm its "best and final" offer of 4 April. We reconfirmed our position and we believed that we would be awarded preferred bidder status on Friday morning.

"As part of the process of awarding exclusivity Duff & Phelps had requested a non-refundable deposit. During the course of Friday Ticketus informed us that they were not prepared to provide this deposit.

"During the course of the weekend individuals within the consortium offered to put up the deposit subject to a small number of conditions which were broadly agreed with Duff & Phelps.

"During the course of the weekend we were also made aware that Ticketus had been in discussions with the Singaporean consortium who, on Friday, had offered Ticketus a 'substantially' better deal to the one offered by us. We confirmed that we were not prepared to increase our offer to Ticketus which we believe to be in the club's best interests.

"The consortium believes that the whole deal process has become incredibly complex and it is critical that a preferred bidder is appointed this week.

"As a consequence, and in the best interests of the club, the consortium has decided to take a step back to enable Duff & Phelps, Ticketus and the Singaporeans to conclude a deal as quickly as possible or not.

"We stand ready to complete our offer of 4 April which included a deal in principle with Ticketus. We still believe that a partnership with Ticketus represents the best opportunity of the club exiting administration via a CVA [company voluntary arrangement].

"We firmly believe that, in the best interests of the club, the whole process has to move forward as a matter of urgency. We are stepping back to assist with this but we stand ready to re-enter the process if a deal can not be reached."

Duff & Phelps responded: "We were surprised that their [Blue Knights] offer to pay an exclusivity fee was withdrawn and although discussions over the exclusivity fee continued over the weekend, no agreement was reached.

"At all stages of the process, The Blue Knights/Ticketus bid has been given the most serious consideration by us as administrators, particularly due to the fact that it was being encouraged by supporters' groups.

"We are aware that Ticketus has also been, at their own instigation, in parallel discussion with one of the other bidders over the last few weeks and it remains to be seen whether these discussions will be taken forward."

Earlier on Monday, Whyte, who owns around 85% of Rangers' shares, warned that any bidder for the club will have to "thrash out a deal" with him.