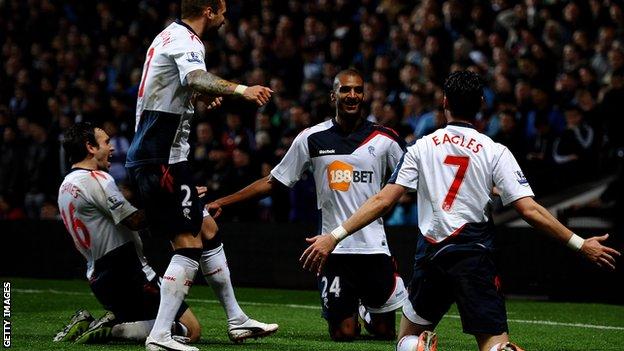 Alex McLeish felt the full fury of Aston Villa's support as his side slumped deeper into trouble near the foot of the Premier League with a home defeat by fellow strugglers Bolton Wanderers.

Villa took a deserved lead through Stephen Warnock just after the hour - but Bolton were ahead within three minutes as Martin Petrov equalised from the penalty spot and David Ngog swept home a second almost immediately.

McLeish's side had impressed in the first half without getting the reward they deserved but the atmosphere inside Villa Park turned sour, and firmly against the manager, in the closing moments, as they chased the equaliser in vain.

Chants of "sack McLeish" - and worse - rained down on the Scot and he was subjected to a torrent of criticism as he made his way down the touchline from the technical area to the tunnel after the final whistle.

Now the man who tasted relegation at Villa's arch-rivals Birmingham last season before moving across the city in the summer faces another battle for survival after a dismal run of only one win in 13 league games.

The result leaves Villa with only four league wins at home this season and means they are just three points above the relegation zone.

Bolton's emotions contrasted sharply, as they saw their hopes of Premier survival lifted by this crucial victory.

Emile Heskey was restored to the hosts' attack with Gabriel Agbonlahor injured - and he was at the heart of their first-half domination, without being able to put the finishing touch to the pressure.

Chris Herd headed over inside two minutes before Heskey found space in the area only to fail to find the target. The former England striker also forced two saves out of Bolton keeper Adam Bogdan.

Wanderers' biggest escape came when Villa again created space in the box, only for Warnock to strike a rising effort against the bar with Bogdan beaten.

Away from the action, Villa Park twice rose in applause in the sixth and 19th minutes for Bolton's Fabrice Muamba, who is recovering after a cardiac arrest, and Villa captain Stiliyan Petrov, who has been diagnosed with acute leukaemia.

The feelings were not quite as warm in the technical area when there was an angry face-to-face confrontation between Bolton manager Owen Coyle and Villa coach Kevin MacDonald after a feisty exchange of challenges near the touchline.

Coyle, clearly concerned about his side's lack of attacking impetus, made a change at the interval by sending on the experienced Kevin Davies for Ryo Miyaichi. It was to prove an influential substitution.

Villa keeper Shay Given was finally tested nine minutes into the second half when he collected Chris Eagles' free-kick at the second attempt.

Villa finally got the lead they merited on the hour - but it was only the signal for a remarkable turnaround that ended with Bolton protecting an unlikely lead.

Charles N'Zogbia had been a real threat on occasions and he set up Warnock for a sliding finish from 12 yards as Villa at last provided the end product to match their approach work.

As the home fans celebrated, Bolton drew level, Petrov scoring from the spot after Mark Davies was pulled down by Carlos Cuellar.

There was worse to come for Villa as Eagles then weaved his way into the area for Ngog to bury a low and powerful finish beyond Given.

The landscape of the game had altered completely and, with 20 minutes left, McLeish introduced Agbonlahor, who had been struggling with a shoulder injury in the build-up to the game, for Heskey.

It was to no avail and, as it became increasingly obvious that this was a losing cause, the Villa fans turned their anger on McLeish.