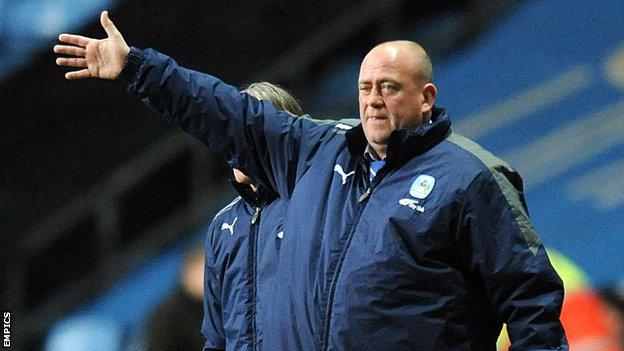 Coventry manager Andy Thorn has vowed his team will go "all out" for victory against Millwall as they fight to avoid relegation from the Championship.

The Sky Blues could be relegated on Tuesday if they lose to Millwall and Bristol City beat West Ham.

"We need to get the result," he told BBC Coventry and Warwickshire.

"Our record at home has been good, we don't want to lose and we want to get three points and put pressure back on the teams around us."

He continued: "We need to show all the commitment and the character that we've shown over the last few games. We need to show some quality and some cool heads. What will be, will be.

"We'll see what happens with the other results afterwards."

Thorn has called on Sky Blues supporters to continue their rapturous backing for the team at the crunch time of the season.

"We've got two home games now and we'll have massive support which will fill the boys with energy. We will give it a right good crack," he said.

"The support they have given us all season has been phenomenal, it's kept everybody going.

"We want more of the same as we will try to repay the faith and support that they have shown us.

"They have been absolutely fantastic this season."