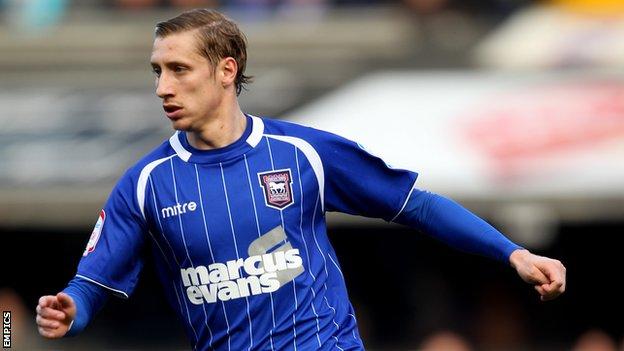 Ipswich Town midfielder Lee Martin is ready to commit his future to the club if he is offered a new deal.

The 25-year-old, who has 12 months left on his current contract, is having his best season for the Championship club since arriving three years ago.

"I'd love to stay. But it's got to come from elsewhere. They've got to love me to stay. It is out of my hands," he told BBC Radio Suffolk.

"It's down to people higher up - the manager and the owner."

Martin has had a run of games in a role behind a lone striker and has found the net five times this term.

It is a marked contrast to last season, when he spent the half of the campaign on loan at Charlton and was recognised predominantly as a winger.

"I don't like being out wide. Obviously I want to be playing and I will play out wide because I want to be in the team," he said.

"But I want to be where the action is, getting on the ball. I've had a sniff of being in there and I really enjoy it.

"It's more of a natural position for me. I was forced into the out wide position when I was younger."

His upturn in form has seen him make 33 appearances this season - compared with 34 in total for Town in the two previous seasons.

But the former Manchester United youth product has been told to alter his approach after angering boss Paul Jewell with his disciplinary record.

"That's passion, that's football. I'm sure people would be having a go at me if I just let challenges slip," said Martin.