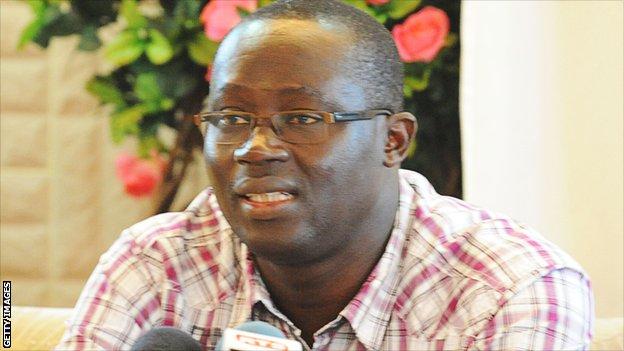 Senegal expect to name their new coach within the next week, says the president of the Senegal Football Federation Augustin Senghor.

"Will we name him at the end of this week or start of next week," Senghor told BBC Sport. "We have a shortlist, but now is not the time to give names.

"The committee members will meet this week and we will finalise our choice.

"Then we will meet with the new minister for sport to decide who the coach will be for the future."

Senegal have been without a coach since sacking Amara Traore shortly after their first round exit from the 2012 Africa Cup of Nations.

The appointment of a new coach, which was delayed by the presidential elections, was originally expected to have been made within the first two weeks of April but has taken longer than anticipated.

"During the election period we thought it was better to wait," explained Senghor. "Now we have the new minister of sport for our country, which was necessary because it is the government official who is in charge of paying the salary of the coach, we will be able to make an appointment shortly."

Although Senghor would not reveal the candidates for the position, he did say that the new coach would be a "charismatic" figure who would command respect from the players.

"We have very good players. Many are playing in the major championships in Europe - in England, France, Spain, Turkey - and I think that if we have a good coach who can manage these great players, we can do well at the next Africa Cup Of Nations in 2013 and also at the next World Cup in Brazil in 2014," added Senghor.

Meanwhile, Senghor is hopeful that his country's best players will be available for selection for their London Olympics qualification play-off match against Oman on 23 April in the English city of Coventry - the one-off tie is for the last spot in the 2012 Games.

"The difficulty for the African national teams is the 23rd of April is not a Fifa date so the players are not allowed to attend this competition if they don't have the co-operation of their clubs.

"It was very difficult, what we did was to visit the managers of all the different clubs and we think we have about 14 players from their teams in Europe to attend this match. Also we have four players in Dakar who will join them in Paris and go to Coventry."

Senghor believes qualifying for the Olympics would be a major boost for Senegal following their poor performance at the Africa Cup Of Nations in Equatorial Guinea and Gabon earlier this year.

"We have never played in the Olympic Games and if we qualify it would be an historic moment for Senegalese football." he said.

"It would be a great thing because in the last edition of the Africa Cup of Nations Senegal played very badly and went out in the first stage. If we qualify it will mean we have put that difficulty behind us, that we are still alive and we can go on with our football."