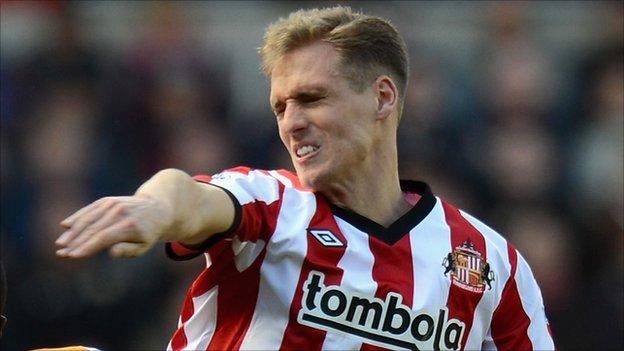 Defender Matt Kilgallon says Sunderland are determined to end the Premier League season in positive fashion after a recent slip in form.

"Every day in training the boss is still working us hard - none of the lads are thinking we'll cruise now."

On a personal level, Kilgallon has emerged as a key member of Martin O'Neill's squad in the absence of fellow centre-halves Wes Brown, John O'Shea and Titus Bramble.

The 26-year-old was ruled out for a month and a half after picking up an ankle injury in January's 1-0 defeat by Chelsea, but following his return to the first team last month has featured in the last four games.

"I got an unlucky injury, I was back in the team and doing alright, but my ankle went and it was a case of here we go again," Kilgallon said.

"I had to be patient, but got back in and I'm trying my best to play as well as I can.

"I've had a lot of help off the other lads, they've made it easy for me, I'm doing alright and now hopefully staying in there is the main thing."