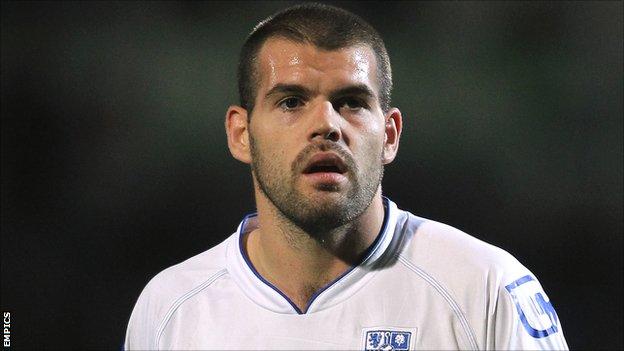 Tranmere captain John Welsh has told BBC Radio Merseyside that he wants to commit his future to the League One club beyond the end of the season.

Welsh, 28, is approaching the end of his contract at Prenton Park.

"I'm captain and loving it here," said the former Liverpool trainee. "We're starting to win games and we're improving with every game.

"Hopefully things will get sorted in the next couple of weeks, but it all depends on who is in charge next year."

Welsh joined Rovers on a free transfer from Hull in 2009 and is approaching 150 appearances for the club.

Ronnie Moore's side secured their League One status with a 1-0 win at Walsall on Saturday and Welsh added: "The lads have been different class since the manager has come in.

"Credit must go to the staff, to the club and to the fans for the position that we're in."

Fellow midfielder Andy Robinson said last week that he was also keen to sign a new contract with Tranmere.