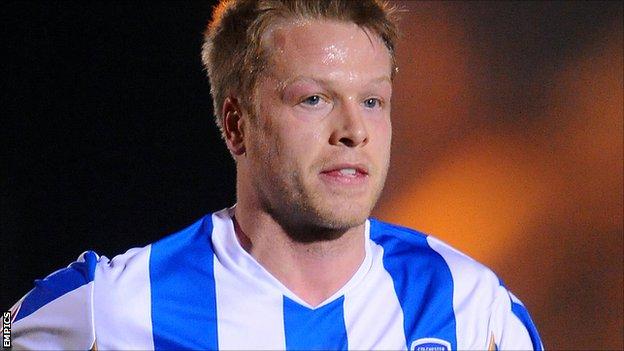 On-loan defender Nathan Clarke believes Bury's second season in League One will be another challenge for the squad.

The Shakers, promoted as League Two runners-up last season, almost certainly guaranteed survival with a 1-0 win against Bournemouth on Saturday.

"It's a challenge for everybody to prove themselves again," the 28-year-old told BBC Radio Manchester.

"A lot of players will have found out a lot about Bury and know their strengths and their weaknesses."

Clarke, who is on loan at Gigg Lane from fellow League One side Huddersfield, continued: "It's a massive achievement after coming up from League Two last season.

"I've played against Bury previously and knew the quality in the squad. With a couple of additions, they can really become established.

"It's a great opportunity when you play the bigger sides to really go and prove yourself. You're playing in 20,000 all-seater stadiums and it's exciting to play.

"But on the flip side, when you play against the teams around you, you've got to make sure that you come out on top."

Clarke is approaching the end of his contract at the Galpharm Stadium and has said he would consider a permanent move to Bury if the opportunity arises.

For now, he is grateful for the chance to play first-team football and put himself in the shop window for any potential suitors.

"It's the way I've got to look at it," he added. "The manager here [Richie Barker] has given me the chance to come and play some games.

"The lads have settled me in perfectly and it makes it a whole lot easier."