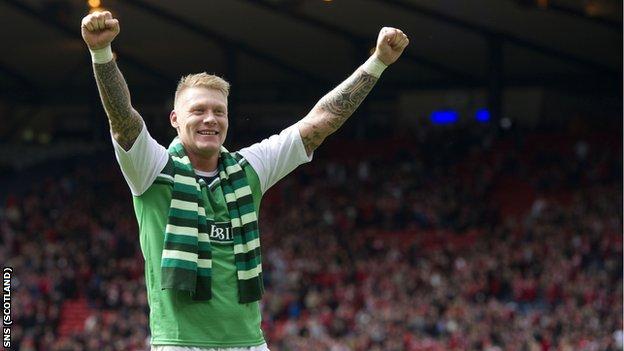 All this and the pandas too. Edinburgh, holding its breath for the salt 'n' sauce final, is suddenly an awfully exciting place.

Let's put the capital's wee issue of the trams to the side, because, to be honest, that's not going well.

The truth is that even Hibs have embraced more points than lines that have scarred the city.

The thing is, despite that hiccup, Auld Reekie can puff out her cheeks with pride.

It's not a football match on 19 May, it's a history lesson. Let's get Neil Oliver to do the commentary.

As one half of Glasgow weeps in despair, the whole of Edinburgh counts the sleeps until 19 May

Here's one for him. It is 32 years since Aberdeen won the championship, Celtic won the Scottish Cup and Dundee United the League Cup. Season 1979-80 was a rarity, one in which three different clubs won the domestic trophies and one of them wasn't Rangers.

Rare, but not unique, because three years later Dundee United won the championship, Aberdeen won the Scottish Cup and Celtic the League Cup.

With the League Cup in Kilmarnock's trophy cabinet and the Scottish Premier League won by Celtic, we have that scenario again.

But never mind the statistics, get on with the game. The Edinburgh Festival of Football has saved the season, got us talking football again and triggered a ticket stampede when most of us had had it up to the neck with politics, paranoia and penalties.

Have we forgotten that this is meant to be a sport, a strain of the entertainment industry and, most of all, fun? That's a playing field out there, not a site for trench warfare.

Good on you, Heart of Midlothian and Hibernian, worthy finalists after two games in which Celtic lost a game and their dignity.

Was it really a coincidence that Celtic's finest run in the season about to breathe its last was hand in hand with the period that Neil Lennon acted with a new maturity and calm?

The post-match march on to the Hampden turf was hardly wise, given that television pictures suggested that the only really dodgy decision concerned the offside positioning of Gary Hooper at the Celtic goal.

But you know what? Given that the league is over, the relegation issue is all but settled, the promotion is done and dusted and Bertram Mills couldn't make the league run-in exciting - although admittedly it has been a right circus at times - I'm right up for this cup final.

It's a saving grace as the curtain comes down on the football, if not the troubles of Rangers which will continue to plague the summer of the Rangers support.

Oh, the irony of it. The leader in the takeover club house is a bloke called Bill. Well, they will be well acquainted with the word.

Meanwhile, as one half of Glasgow weeps in despair, the whole of Edinburgh counts the sleeps until 19 May and the biggest meeting between the city's two clubs that has ever been. A match so dramatic that the fear of losing is almost greater than the joy of winning.

Hearts are a better team. By miles. Hibs have lost their first-choice keeper and have at times this season been as riveting as the shopping channel. But fate is a curious mistress. And can seduce you into doing strange things.