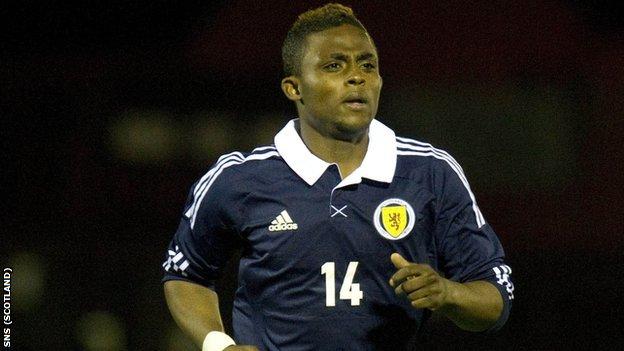 Islam Feruz could become Scotland's youngest ever Under-21 player should he feature in the friendly against Italy at Easter Road on 25 April.

The Chelsea forward, a Somalian asylum seeker who came to Glasgow in 2001, will be 16 years and 197 days, beating the record held by Christian Dailly.

But coach Billy Stark does not want to heap pressure on the ex-Celtic player.

"We felt it was a wee opportunity to bring him in and have a look at him in and around the squad," he said.

Feruz's progress has been followed with interest after he was spotted by Celtic aged 10.

The late Tommy Burns, when head of the club's youth development set-up, helped lobby immigration officials to let Feruz and his family stay in Scotland when he was 12 after they were threatened with deportation.

Feruz was first called up to the Under-17s when he was 14, after rules were changed to allow the home nations to pick players with five years' schooling in their adopted country.

You can only judge them on their talent just now. He is a very talented boy

Chelsea paid a fee to Celtic after persuading him to leave the Glasgow club in September last year.

Still a schoolboy, Feruz last month scored in the first leg of the FA Youth Cup semi-final as Chelsea progressed past Manchester United.

Stark said: "He has obviously had a fair bit of publicity over the last few years.

"He has played Under-17 and played in the Victory Shield before.

"Mick Oliver, our international scout, and [performance director] Mark Wotte have seen a bit of him in the last couple of weeks and brought back good reports.

"You can only judge them on their talent just now. He is a very talented boy.

"He has to learn about all the other things that go along with becoming an important first-team or international team member."

He is one of seven players in the squad who are uncapped at this level, along with Celtic pair Lewis Toshney and Dylan McGeouch, Rangers midfielder Rhys McCabe, Rochdale goalkeeper Matthew Edwards, Aberdeen left-back Clark Robertson and St Mirren midfielder Kenny McLean.

Huddersfield striker Jordan Rhodes and Hull midfielder Tom Cairney have been left out as their teams push for play-off places.