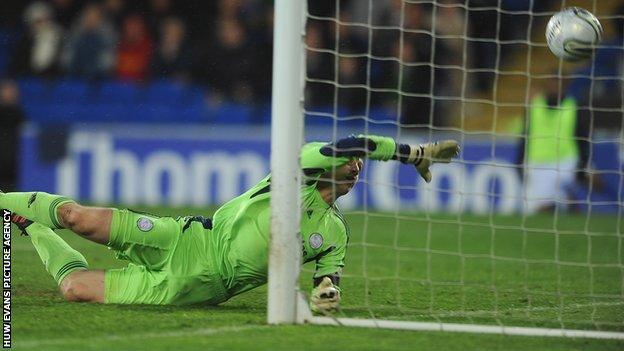 The centre-back, standing in his own half, seized on a low clearance from Frank Fielding and hit the ball straight back over the Rams keeper.

That sealed a 2-0 win and means Cardiff need one win to seal a play-off berth.

"I've asked for the video, it's a moment in your career that never normally happens," Hudson said.

"People might laugh but [keeping a clean sheet] was more important and that's how I felt straight after the game.

"We've had three draws at home but to win that, they [Derby] have come here with no fear, they've got nothing to play for, they can go out and enjoy themselves.

"But we knew we had to win, it was a bit of pressure, we didn't start well but we've ground out another result which we've been doing recently."

Hudson's defensive performance in tandem with Ben Turner was arguably the most important against an adventurous Derby.

But the centre-back admits that his 63rd-minute goal is likely to be a defining moment of his playing career.

"I did mean it, it was more the crowd that shouted 'shoot' and I realised that he [Fielding] was off his line and I thought I'd try my luck, try and middle it and see where it goes," Hudson added.

"I caught it sweet and it managed to go in. When it went in I was more shocked, I looked around to see if anyone was jumping up and down.

"I just saw Marshy [David Marshall] run from his goal... I just can't believe it's gone in, I couldn't tell you my feelings but I am really happy with the clean sheet and the three points."

With seventh-placed Middlesbrough being held at home by Doncaster, Cardiff know that a win at home against Leeds United on Saturday will guarantee a play-off place.

"Leeds lost [to Cardiff's promotion rivals Blackpool on Tuesday] and they'll be coming here to try and spoil the party," Hudson added.

"They'll be trying to finish on a high so we know it's going to be a tough one.

"To go into next week we've got a bit of confidence now that we've scored a couple of goals and kept a clean sheet."