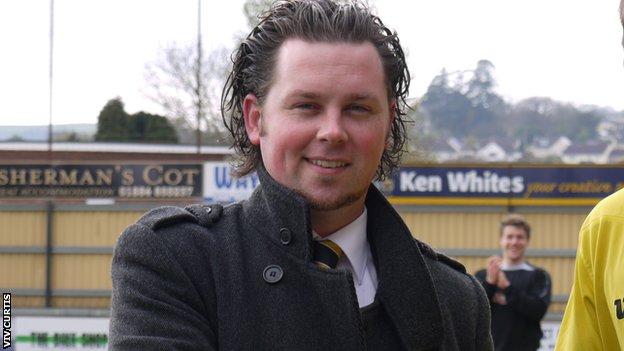 Tiverton Town have appointed what the club believe is one of the youngest chairmen in professional or semi-professional football.

The Southern League Division One South and West side has appointed 27-year-old internet entrepreneur Matthew Conridge.

He says his aim is to make the club financially sustainable.

"I'm not here to chuck thousands of pounds into a black hole, I'm here to pull everyone together and work with a good team," he told BBC Sport.

Conridge arrived at Ladysmead a year ago and within a few months moved into the vice-chairman role before taking over the top job this month.

They won back-to-back FA Vase titles in 1998 and 1999, and Conridge went to Wembley with his stepfather to see Tivvy retain the title, before they gained promotion to the Southern Premier League the following year.

But since then the club has slipped back and were relegated out of the Southern Premier League last season.

They have also seen their crown as Devon's fourth-best team - behind Exeter City, Torquay United and Plymouth Argyle - snatched from them, with rivals Bideford clinching the league title this season and winning promotion into the Southern Premier.

But Conridge says he will not risk the club's future to try to reclaim their former glories, although he admits his ambition is to lead the club into the Blue Square Bet South.

"This club will not spend more than it can afford to chase a dream," he says firmly.

"If we can't afford a budget to go to Blue Square Bet South we won't pay it.

"You see time in, time out, a new chairman comes in and grabs the limelight, but when reality strikes it all falls apart.

"I will not in a million years put this club under any financial strain or pressure to chase headlines for my ego, we won't chase unsustainable dreams that's for sure."

The entrepreneur has installed a commercial manager and press officer and says that investing in the club, rather than directly on players, is the way to bring success on the field.

"If we invest into the club it generates additional revenues which go into the playing budget.

"A lot of directors have invested big sums in the past and maybe the money hasn't been used in the right manner and it's a target of the board to use it in the right way."

He realised early on in his life that he "didn't want to be part of an organisation", so set up a business in his bedroom with £600 savings, importing products directly from the Far East and selling them online.

His firm has now moved into new 42,000 square foot premises in Crediton and has a number of different online brands.

And just as his businesses have grown, so he hopes that he can help manager Mark Saunders grow Tiverton Town into a force in non-league football.

"What we've done this year is stabilised after five or six years of decline.

"We're now stabilising off the pitch and the target next season is promotion, be it automatic or through the play-offs.

"We've got a very good core squad and Mark will be looking to add to it through the summer."

Whether Conridge can be as successful in football as he has been in business only time will tell, but at 27-years-old, time is one thing he has on his side.