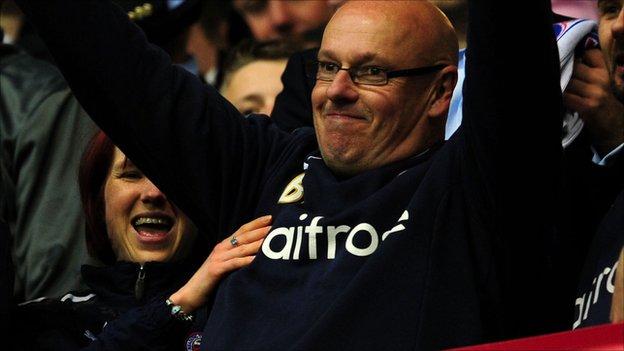 Reading manager Brian McDermott woke up on Wednesday morning knowing he can start preparing his team for the challenge of competing in the Premier League.

It was very different at the end of last season - on Monday, 30 May 2011 to be precise - when McDermott suffered his worst day in football.

His Royals side had just been beaten 4-2 by Swansea City in the Championship play-off final at Wembley and missed out on promotion to the promised land of English football, the Premier League.

"My worst moment was on the pitch at Wembley in May last year," said McDermott.

"I didn't see any good coming out of that; it was a bad moment."

And the play-off hangover continued into the start of the season.

Reading made a slow start to the new campaign, winning just one of their opening seven games as they slipped to 23rd in the Championship table.

But McDermott, who started his career in football as a winger at Arsenal, refused to panic.

Prior to becoming Royals boss following the dismissal of Brendan Rodgers in December 2009, he had eight years of experience as a scout for the Berkshire club and used that to good effect when he signed defender Kaspars Gorkss and striker Adam Le Fondre as replacements for Mills and Long.

Who is Brian McDermott?

2000: Joins Reading as a scout/coach working under Alan Pardew and Steve Coppell

"It clearly wasn't right at the back in the first dozen games and the manager went and signed Gorkss, who is a hugely experienced Latvian international.

"His arrival coincided with defender Alex Pearce improving and that was a massive moment. Brian could have just let it go but he didn't. He recognised a problem, addressed the situation and signed a big-name player which eventually reaped big rewards."

Reading's form slowly started to improve as the 2011-12 season wore on, with a sequence of four straight league wins in early December helping them climb the table.

McDermott stuck to his favoured 4-4-2 formation and always sent his side out determined to collect three points regardless of the form of the opposition, and with instructions to defend from the front.

Allied to this, the Royals had a fantastic team spirit, in part a product of the care McDermott took in making sure he brought the right sort of character to the club.

His handling of unsettled winger Jimmy Kebe was testament to McDermott's man-management skills. He recognised the need to put an arm around his mercurial talent as speculation about his future at the Madejski Stadium intensified.

Kebe later signed a new contract and has been a key member of a side which has lost just once in their last 17 fixtures, culminating in their 1-0 win over Nottingham Forest on Tuesday that sealed promotion.

The turn of the year saw the arrival of a new owner at Reading - Anton Zingarevich. Zingarevich had only just arrived at the club when McDermott was strongly linked with the vacant managerial job at Wolves.

By this time Reading had long realised how good a manager they had and quickly offered him a new contract, one that the 51-year-old signed.

McDermott pulled off a masterstroke before the January transfer window shut. Recognising the need for a new talisman to lead the line, he signed Jason Roberts from Blackburn Rovers - a striker who had twice previously been promoted to the Premier League from the Championship. This was Moneyball at its finest.

"Brian was smart to get him and he did a good job for us," Zingarevich told BBC Radio Berkshire.

Roberts would prove to be the catalyst for their promotion push, scoring three in his first four games, and quickly became a huge fan of his manager.

"His way of doing things is to quietly go about his job," Roberts told BBC Sport.

"He demands respect and is very particular about the personalities he brings in. His man-management is outstanding and he goes about his business in a way I understand."

Reading have peaked at the right time, collecting 46 points from a possible 51.

"Credit to McDermott because their form in the last 17 games has been phenomenal," added Williams.

"The job Brian has done this season has been brilliant, they have carried on from last season and it is no real surprise to see them promoted."

So, having admitted to suffering his worst moment in football, less than 12 months later McDermott can finally enjoy a summer to savour.

"Of course this is my best moment in football," he said. "We've been promoted and I can celebrate for the next two months.

"I'm happy, we've done a good job this year. The fans are going to have a good summer and that's what it's all about. I had a miserable summer last year."