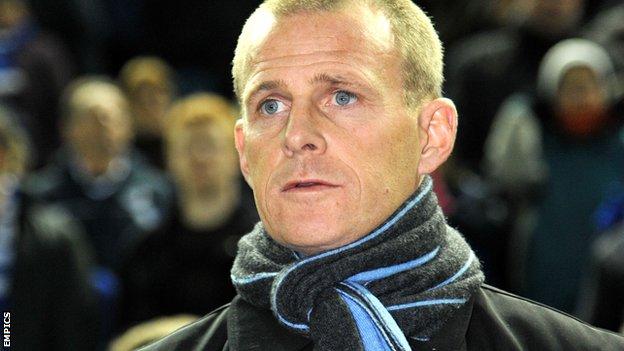 Stevenage boss Gary Smith has claimed the race for the League One play-offs will be decided by who can best cope with the strain of the run-in.

John Mousinho's late goal secured a 1-0 victory over top-six rivals Carlisle on Tuesday and moved Boro to within a point of sixth-placed Notts County.

"Tuesday night, when the pressure was on, we came good," Smith told BBC Three Counties Radio.

Race for sixth place: Who do they play?

"But when the pressure mounts it does strange things to people."

He added: "It was a performance that showed everyone we're really going for this and we think we've got a chance here."

Stevenage's play-off hopes looked to have dwindled after a run of one win in 13 league games.

But back-to-back victories have rekindled their ambitions of overhauling Notts, who have an inferior goal difference to the Hertfordshire side.

"Of course we can't affect Notts County now. But what we have done is put them under some pressure.

"Don't count Carlisle out of the mix either. They've got a tough game at the weekend [away at Sheffield Wednesday] but they'll feel if they keep pushing they may end up in the spot they want to be."

If Stevenage are to make a late charge into the play-offs - and bid for a third consecutive promotion - Smith believes the form of striker Patrick Agyemang will be key.

"I think Pat has come really good at a great time for us," Smith said of the QPR loanee.

"He looks his old self. He's full of desire, strength and individualism and he's a real lift for everyone when he gets on the ball."

For the promotion and relegation news as it happens in League One this Saturday - follow our new exclusive text commentary service Football League Live. It has fixtures, results, as-it-happens tables and regular reports from across the Football League. Saturday, 1400 BST, bbc.co.uk/sport.