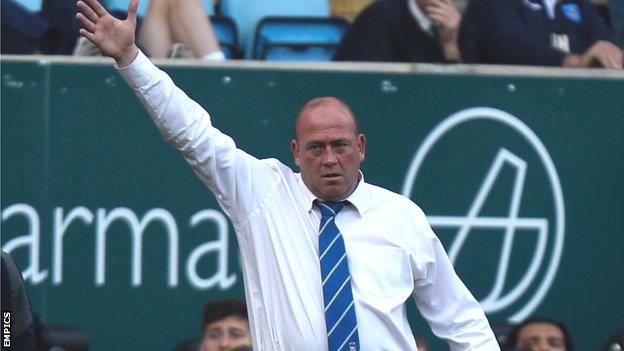 Coventry manager Andy Thorn says he is "angry" at what has happened at the club, with City looking to have lost their battle against relegation.

Defeat at home to Millwall on Tuesday means that the Sky Blues must beat both Doncaster and Southampton, and hope other results go their way.

"We've tried to do it on a big scale and been found out. It's disappointing, I'm angry and all sorts at the moment."

Coventry supporters protested against the club's owners, SISU, at the start of the season over what they saw as cost cutting.

Seventeen players have left the club over the course of the season, including striker Marlon King, to Birmingham, and goalkeeper Keiren Westwood, who is now at Sunderland.

"You can't do what we did and not replace people because it will catch you out in the end and it has caught us out up until this point," Thorn continued.

"The lack of resources and everything that has gone on, from last summer up to Christmas, has killed us.

"You stand there on the side and you watch and you know that the players are giving everything but you know that we're short in areas."

And Thorn was coy when asked if he felt let down by the club's owners.

"Do the supporters? Everyone has got their own views. It hurts me," he added.

"I stand there and I see everybody hurting as well. I'm at the helm and I'm watching it. I don't particularly like what was done to me, but that's how it's gone. It's really, really disappointing."

Coventry missed a host of chances, including a second-half penalty, as their hopes of survival all but evaporated with defeat against the Lions.

"It was really disappointing. We had more than enough chances and we had 22 efforts on goal which is normally enough to win two games. This has kind of been the story of our season," Thorn concluded.