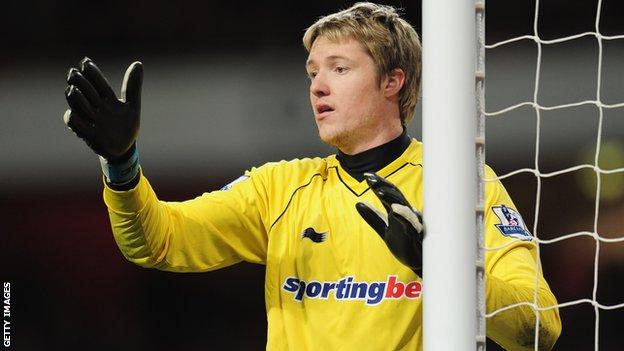 Wolves goalkeeper Wayne Hennessey will be sidelined for six months with a torn cruciate knee ligament.

The Wales international will undergo an operation on Wednesday after a scan revealed the seriousness of the injury.

Hennessey, 25, picked up the problem during

The injury means he is likely to stay at Molineux this summer, even if bottom club Wolves drop into the Championship as expected.

Hennessey's performances this season have attracted interest from a number of other Premier League clubs having enhanced his reputation, despite Wolves leaking 73 goals in 34 games.

He has established himself as Wales' first-choice between the posts, but the injury is almost certain to force him to miss the first four qualifiers in the 2014 World Cup campaign in September and October.

Initially, Hennessey had not realised the extent of the injury and felt fit enough to complete the game at the Stadium of Light.

"He just felt his knee during the game. He went to catch a ball right at the end and didn't think too much of it," explained Wolves manager Terry Connor.

"But he felt slightly worse on Sunday so the medical guys wanted him to have a scan."

The injury is likely to mean Dorus de Vries will make his Premier League debut against Manchester City at Molineux on Sunday.

Hennessey's Dutch understudy has only appeared in five cup games since joining from Swansea last summer.

Meanwhile, Carl Ikeme has been recalled from his loan spell with Championship side Doncaster, who were relegated on Saturday.