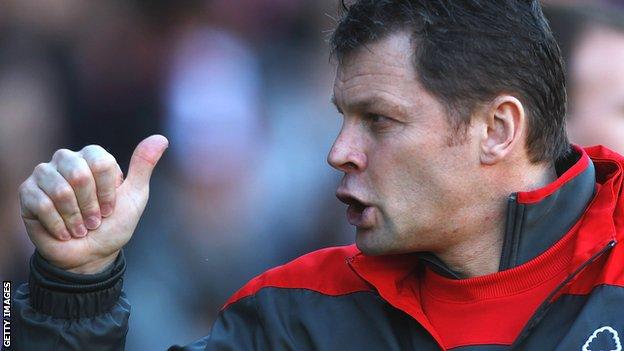 Nottingham Forest manager Steve Cotterill insists he "never doubted" whether he would keep the Reds in the Championship.

Despite losing 1-0 at Reading on Tuesday, Forest's safety was secured after Coventry lost at home to Milwall.

"We've got the job done, now we have to secure the people who have done well for us," Cotterill told BBC Radio Nottingham.

"I never thought we couldn't do it, and I haven't moved from that."

"I think Steve Cotterill went about things in the right way. He's done a really good job, bringing in experience at the right time, and the players he's brought in have been absolutely superb."

Cotterill took over at the City Ground in October with Forest 21st in the table and still looking for their first home win of the season.

Under former boss Steve McClaren, the Reds had taken just eight points from their opening 10 matches.

"It's a measure of how far we've come that we've achieved the objective of staying up, but we're disappointed about losing the game," Cotterill said.

"We've got the job done, now we have to make sure we secure the people who have done very well for us."

Forest have won four and drawn four of their last 12 matches to secure their Championship status.

"To be safe with two games to go is a huge achievement," Cotterill added.

"But the squad is unbalanced, it's been left to rack and ruin over the last two years. Now we need to address that."