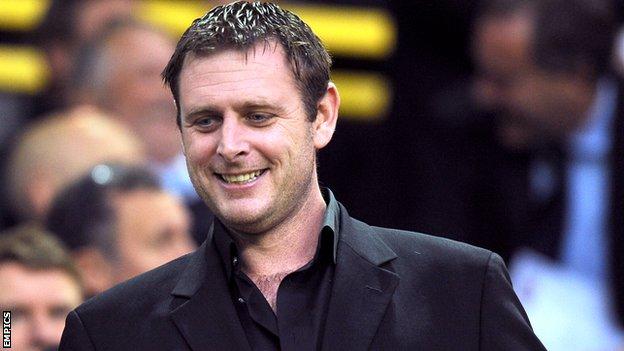 Peterborough United chairman Darragh MacAnthony has claimed his side can challenge for promotion to the Premier League, should plans to govern clubs' finances come into effect.

Posh, who secured Championship survival on Tuesday, support a proposal to limit wages to 60% of turnover.

"I don't want to get above my station or be over ambitious," MacAnthony told BBC Radio Cambridgeshire.

"But we want to build a club that can compete higher than the Championship."

This is only the second time Posh have successfully survived a second-tier campaign. They did it previously in 1992-93 and were relegated 12 months later

He added: "With Financial Fair Play (FFP) coming into play it'll be a really even playing field in two or three years time.

"We've got to make sure we're still at the races so we can compete with that."

In November, Championship clubs agreed, in principle, a framework for a new Financial Fair Play system, with the intention it would come into force next season.

The proposals, which would see clubs punished for spending more than 60% of their annual turnover on wages, have yet to be ratified though and look unlikely to be passed in time for the 2012-13 campaign.

However, after Posh were mathematically assured of survival courtesy of Coventry's defeat by Millwall, MacAnthony has targeted stability in the second tier until FFP comes into existence.

"With our policy, that could put us up there with the biggest clubs in the league and we could have a right chance then," he said.

Peterborough's plan includes a desire to produce young talent at London Road, with midfielder Joe Newell being positioned as Posh's brightest hope for the future.

The 19-year-old has scored once in 19 games this season.

"We're bringing through youngsters," said MacAnthony. "You look at Joe Newell and the ability he's got - he's going to be like signing a new £2m midfielder next year.