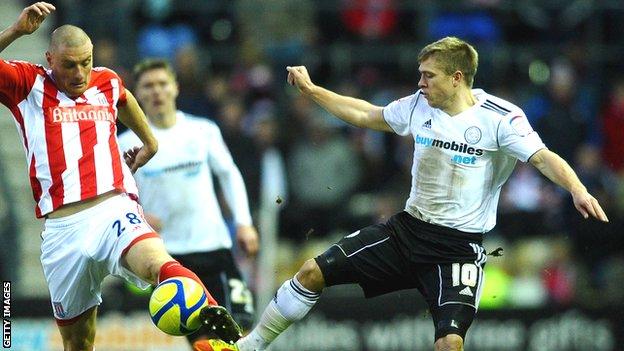 Derby forward Jamie Ward has signed a new two-year contract at the club, with an option for a further 12-month stay.

The 25-year-old, who first joined the Rams in February 2011, still had a year to run on his current deal.

He's a niggly little so-and-so, one of those players you don't like playing against

"He gives us options. He can play wide, he can play up front, so it's nice to get him tied down for that length of time," manager Nigel Clough told BBC Radio Derby.

"I think it was fitting to reward Jamie, he's earned this."

Ward becomes the third player in a week to sign a new contract at Pride Park, after defenders Jake Buxton and Gareth Roberts. extended their stays with the Championship side.

The 25-year-old has scored four goals this season, including a memorable winner against Nottingham Forest in September.

"We've been discussing it with him for a month or two," Clough added.

"We weren't desperate to get something done because he still had plenty of time on his contract, but it's good to get it done.

"He's a niggly little so-and-so, one of those players you don't like playing against. We need that feistiness."