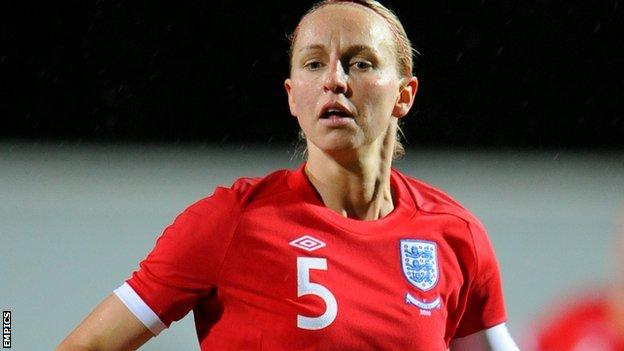 The 34-year-old Arsenal defender, who has won 90 caps, is expecting her first child and will not now feature in this year's Olympics.

She said: "I'm pregnant and I'm going to be a mum for the first time in October.

"I have spoken to [England boss] Hope Powell and this will more or less signal the end."

The centre-half made her England debut against Scotland in 1997 and captained her country at four major tournaments - two European Championships and two World Cups.

White missed the decisive spot-kick during last summer's World Cup quarter-final shoot-out loss to France, which proved to be her last kick in an England shirt.

She has yet to decide whether she will retire from the game totally as she recovers from a knee injury.

"I have had 15 or 16 years with England and I think this was always going to be my last year," she said.

"Having made that decision after the World Cup I picked up yet another injury and had to have keyhole surgery on both my knees, which has been quite a struggle to come back from.

"But I have always overcome injuries in the past and I was determined to get over this one. I finally got back to playing and training in the New Year, but basically my international career will be over now."

Everton left-back Rachel Unitt captained England for their recent 6-0 win over Croatia Women and is one of the contenders to take the armband on a full-time basis.

The squad for the Olympics has yet to be announced, with Powell due to name the players involved next month.

"Faye has been a tremendous player and leader for me ever since she made her debut and I have personally thanked her for 15 years of service in an England shirt," Powell said.

"She is one of the best defenders in the women's game and an outstanding ambassador and role model.

"I have had a good chat with her and I told her the game will always be there for her, but, for now, this is a new, exciting chapter in her life and I wish her all the best."