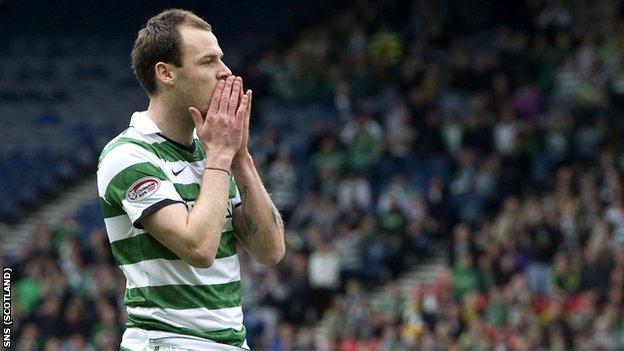 Celtic striker Anthony Stokes will serve a one-match ban in next season's Scottish Cup after an incident at the end of the semi-final loss to Hearts.

Ref Euan Norris included an A5 offence in his match report, which pertains to "offensive, insulting and/or abusive language and/or gestures".

The punishment for such an offence is akin to that of a red card.

But the ban is tournament-specific and Stokes will be free to play at Motherwell in the league on Sunday.

An SFA spokesman said: "A report has been submitted and the player has been notified of an A5 offence."

Manager Neil Lennon may also face punishment if Norris includes another incident that took place after the final whistle.

Lennon approached Norris on the pitch after Craig Beattie's late penalty had ensured a 2-1 win for Hearts.

Celtic coach Alan Thompson later confirmed Lennon had been to the referee's room.

Two of Lennon's three pending disciplinary cases will be heard by the Scottish FA's judiciary panel at Hampden on Thursday.