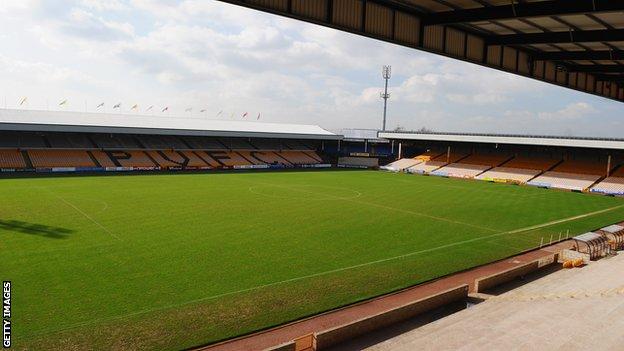 Prospective Port Vale owner Keith Ryder says he is open to working with his takeover rivals, if he feels they can help the club progress.

Vale administrators Begbies Traynor accepted Ryder's £1.4m bid at the start of April, and he is keen to move ahead with his plans.

"I'm willing to talk to anybody who is willing to see the club advance," Ryder told BBC Radio Stoke.

"That includes other bidders who have been unsuccessful."

He continued: "If they want to have a chat with me they know where I am.

"If we feel that there is something we can do for the benefit of Port Vale and something that agrees with what we want to do then I am very happy to have that conversation."

Ryder, a Manchester United fan from Lancashire with a background in management consultancy and property, admitted that while he was initially interested in investing in a football club, Port Vale was the only one that really appealed.

"When I first saw the club I recognised that the infrastructure here is worthy of a much higher League club," he added.

"That impressed me to begin with. When people get to know that you are interested in investing in a football club they say 'come and invest in ours', but I never looked at those in any detail because the basic infrastructure is here and we can really work with it.

"Everybody says I'm mad, but I'm a big football fan. I enjoy watching football. This is business as well, it's a business venture. We have to get things right on and off the pitch."

Speaking enthusiastically about his potential role, Ryder is looking forward to cheering the team on.

"I've got to make sure that if I'm in the directors' box I'll keep the code of conduct but I'd really like to be out there shouting abuse at the referee," he joked. "I'll be 100% behind the Vale."

While he is keen to stabilise the club and invest in the local area, Ryder would not be drawn into outlandish claims.

"We need to get the deal done before we start launching any plans, but I'm hoping Burslem is an area that is going to be regenerated and the club needs to be a part of that," he said.

July will be an exciting time, very busy in terms of signings. We've told Micky to start talking to the players about new contracts

"We've got plans but there are no big promises, such as being in the Premier League within five years. There are lots of small things we need to put in place. We want to make lots of improvements in lots of areas of the club."

Ryder is confident that the local council will agree to his proposed Company Voluntary Arrangement (CVA), which will stipulate how much money club creditors will receive.

And he revealed he already has a very positive working relationship with manager Micky Adams, and is planning for next season.

With 20 players out of contract at the end of June, Ryder is keen to lay the foundations early for when the takeover is finalised.

"I have had conversations with Micky about the playing budget for next year, we're working on that with him," he said.

"July will be an exciting time, very busy in terms of signings. We've told Micky to start talking to the players about new contracts.

"I will try to provide him with the funds that he needs and let him get on with his job. We've had good, positive conversations. I get on with him and I look forward to working with him."

A management hierarchy is being lined up as part of Ryder's long-term strategy, something which will help him stay out of the media limelight.

"I will be very hands-on initially but we'll get the strong management team built and the day-to-day running of the club will rest with them," he added.

"I will not be a very public chairman. My job is to try to get things right off the pitch and behind the scenes. That's what I will be working hard on."