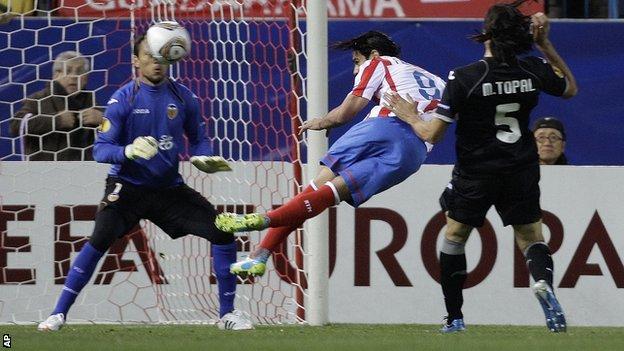 Radamel Falcao headed in to put the home side in front before Jonas tapped in to equalise against the run of play.

Atletico responded with a Miranda header before Adrian Lopez's angled shot added to the hosts' lead.

Costa's goal came in the fifth minute of added time for a vulnerable Valencia side, who were comfortably beaten by an Atletico team that will be ruing their late lapse of concentration.

With their league meetings this season ending with a 1-0 Valencia win and a goalless draw, a close contest seemed to be on the cards but the reality was anything but, as Atletico overwhelmed their visitors.

As well as the incentive of a place in the Europa League final, the game was given an added edge as Valencia still feel aggrieved at being knocked out of the competition by Atletico in controversial fashion at the last-eight stage two years ago.

Valencia thought they were denied a blatant penalty when they went out on away goals but the remnants of any sense of injustice did not appear to galvanise the visitors at the Estadio Vicente Calderon.

The home side, who had won their previous 10 Europa League games, quickly had their rivals on the back foot.

Part of Atletico's strategy seemed to be to expose Valencia left-back Jordi Alba and it soon paid off when they took a deserved lead.

Arda Turan got in behind Alba and, despite Valencia centre-back Adil Rami trying to shield the ball out of play, the Atletico midfielder managed to deliver a cross which Falcao nodded in.

It was all Atletico before Valencia almost snatched a goal against the run of play when Rami headed just wide from a corner.

Valencia looked out of sorts but, after Atletico had failed to turn their domination into more than a 1-0 lead, they made them pay.

A Tino Costa corner was nodded on to the far post where Jonas was waiting to tap the ball home.

The goal only proved to inspire Atletico as they came out after the break with renewed intent and industry.

Rami failed to get his head to a Diego free-kick and Miranda stole in behind him to head in.

Lopez surged at at backtracking Valencia defence before sidefooting in a precise angled shot to extend Atletico's lead.

Falcao cut inside and unleashed an 18-yard shot which went in off the underside of the crossbar to put what seemed to be the finishing touch on an Atletico victory.

But there was a sting in the tail for the home side when Costa planted a firm header into the Atletico net from an injury-time corner to keep the tie alive for the second leg on 26 April.

Atletico Madrid striker Radamel Falcao: "The important thing is that we won convincingly. The victory is ours as well as the advantage in the tie so we have done a very good job."

Valencia striker Roberto Soldado: "That [late] goal gives us a chance to mount a comeback. We weren't very good in attack or defence. For a Europa League semi-final you have to be at 100% and we did not manage it."