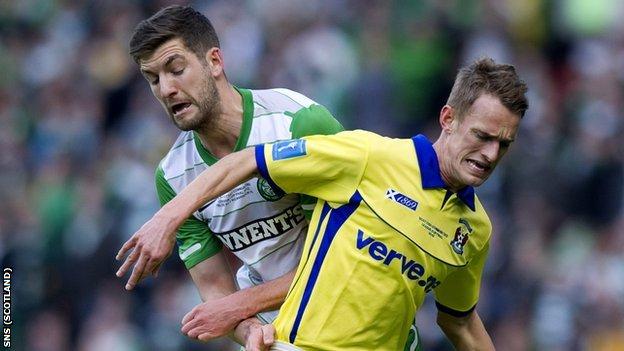 Scottish Premier League winner Charlie Mulgrew and joint-top scorer Jon Daly have been nominated for the PFA Scotland player of the year award.

Rangers captain Steven Davis, the 2010 winner, and Kilmarnock forward Dean Shiels are also in the running.

Dundee United skipper Daly has scored 21 goals this term, 18 in the SPL, and Mulgrew helped Celtic win the title.

"There is no greater honour in football than to be voted the best player in your country by your fellow professionals."

Mulgrew regularly provided goals and assists during Celtic's championship triumph while Shiels, on-loan from Doncaster, was part of Killie's League Cup-winning side.

Davis, who has skippered the Ibrox club during their ongoing period of administration, said: "It is an honour and a privilege to be nominated again for the player of the year award and I would like to thank PFA Scotland and my fellow professionals for their votes.

"I am very proud to be captain of Rangers Football Club and I share this nomination with my team-mates and the supporters who have backed the team in huge numbers during these difficult times."

Aberdeen's Jim Bett was the last man to win Scotland's player of the year award whilst not playing for Celtic or Rangers, 22 years ago.

Daly's United team-mates Gary Mackay-Steven and Johnny Russell are candidates for the young player of the year award along with Celtic winger James Forrest and St Mirren midfielder Kenny McLean.

In the Scottish Football League categories, champions Ross County have two players in the running for the Division One player of the year - Michael Gardyne and Grant Munro - and Falkirk also have two nominees, 26-goal Farid El Alagui and goalkeeper Michael McGovern.

Three members of Alloa Athletic's Third Division-winning squad - Kevin Cawley, Steven May and Ryan McCord - are nominated for the league's player of the year prize, along with Queen's Park's Jamie Longworth.

The winners will be confirmed at an awards ceremony in Glasgow on 6 May.