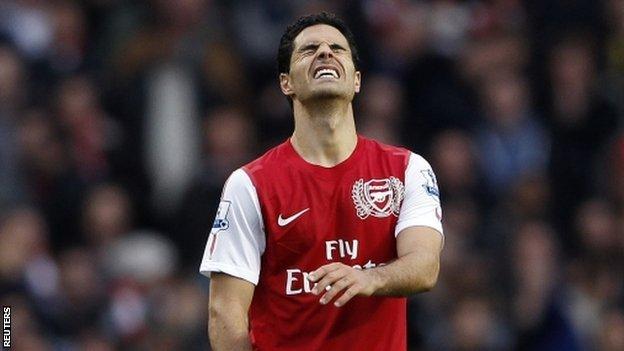 Arsenal midfielder Mikel Arteta will miss the remainder of the season with ankle ligament damage.

The Spaniard picked up the injury during on Monday and left the Emirates Stadium on crutches.

While subsequent scans have revealed no break, the ligament damage is serious enough to rule the 30-year-old out of Arsenal's four remaining matches.

The Gunners still have Chelsea, Stoke, Norwich and West Brom to play.

With Jack Wilshere also out for the season, Abou Diaby struggling for match fitness and Yossi Benayoun ineligible to face Chelsea on Saturday as he is on loan from the Blues, manager Arsene Wenger has been left with a selection headache.

Aaron Ramsey is the most likely to come into the side in place of Arteta, with Tomas Rosicky, Alex Oxlade-Chamberlain and Alex Song making up the rest of the Arsenal midfield.

Wenger has warned his players of the importance of the match against Chelsea, with Tottenham Hotspur and Newcastle United in position to take advantage of any Arsenal slip-up in the race to finish in the top four to gain a Champions League place.