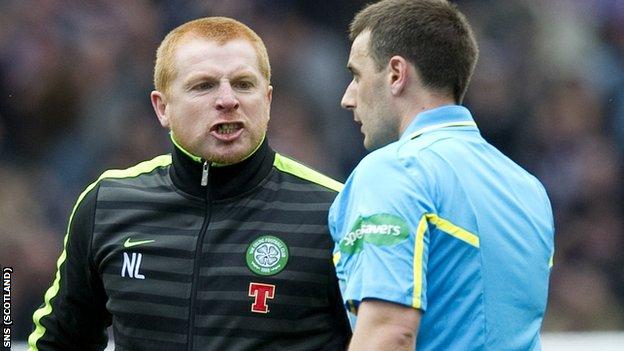 Celtic manager Neil Lennon has been given a two-match touchline ban following his recent criticism of referee Willie Collum.

Lennon was unhappy his side were not awarded a penalty by Collum near the end of Celtic's 1-0 Scottish League Cup final defeat to Kilmarnock.

In addition, the Scottish FA decided not to punish Lennon further for his conduct in a 25 March game at Ibrox.

It said his sending-off at half-time was a sufficient sanction.

Lennon described Collum's decision not to award a late penalty in the final at Hampden as "criminal".

The two-match ban is to be applied immediately for a breach of Rule 68: "Making comments in an interview which criticise the performance of a match official in such a way as to indicate bias or incompetence."

The following week Lennon was sent off by Calum Murray at the interval in the Scottish Premier League defeat by Rangers.

However, the judicial panel tribunal "imposed no further sanction on the basis that the half-game served outwith the technical area was sufficient".

Its ruling on the Ibrox incident, posted on the SFA website, made reference to Rule 203: "No member of Team Staff shall commit Misconduct at a match, including but not limited to committing acts of the kind described in the Schedule of Offences in Annex C*.

"* Misconduct at a match by dissent, the adoption of aggressive behaviour towards a match official and the repeated use of offensive, abusing and insulting language."

Lennon will be in the stand for Sunday's game at Motherwell and the final Old Firm match of the season when Rangers visit Celtic Park on 29 April.

A Celtic spokesman said: "We can confirm that we are satisfied with the fairness and spirit of the hearing and that no appeal will be made against the findings or sanctions."

Lennon has also been written to by SFA compliance officer Vincent Lunny demanding an explanation for his comments about referees before a league game against St Johnstone.

And fresh charges are likely to be brought against the championship-winning manager following the Scottish Cup semi-final defeat by Hearts on Sunday.

After the final whistle, Lennon ran on to the pitch to confront referee Euan Norris, angered by a last-minute penalty that was converted by Craig Beattie to settle the tie 2-1.

Celtic first-team coach Alan Thompson later confirmed Lennon had been to the referee's room at Hampden.

Lennon later commented on the match via his Twitter account, ridiculing the penalty award and saying he believed some decisions awarded against his team were "personal".