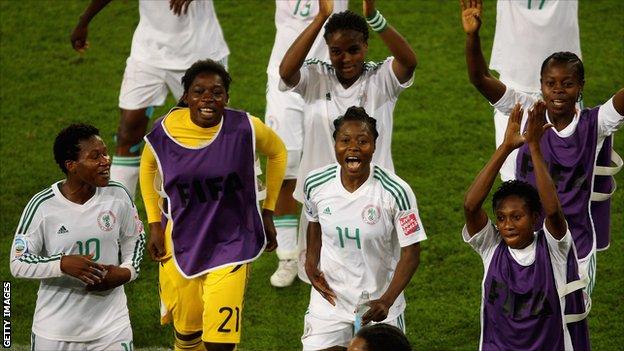 The 60-year-old has been charged with reviving the fortunes of the Super Falcons following their failure to qualify for the 2012 London Olympics.

Ikhana has signed a four-year deal, replacing Eucharia Uche, whose contract was not renewed after last year's Fifa Womens World Cup in Germany.

"I'm proud to take over as coach of the Super Falcons," Ikhana said.

"I'm prepared to add great value to the women side and looking forward to dealing with the talented players we have."

Ikhana, who led Enyimba to the African Champions League title in 2003, has been set the task of reaching the semi-finals of the 2015 Fifa Women's World Cup finals in Canada, as well as qualification for the 2015 All Africa games in Mozambique and the 2016 Olympics in Brazil.

But his immediate focus will be the 2012 African Women's Championship, which takes place in November in Equatorial Guinea.

"Targets are very important in football but I'm confident of taking this team to the top of women's football," said Ikhana, speaking at a news conference in Abuja.

"With the support of everyone we can achieve our goals. Super Falcons need to forget about the past and focus on the important things ahead."

In 2008, Ikhana told BBC Sport he was quitting the game in the country because of what he alleged is a "corrupt system" but after huge persuasion and pressure from several quarters, the former Nigeria international and 2003 Caf coach of the year returned to take charge of Sharks, before brief stints in Niger Republic and Kwara United.