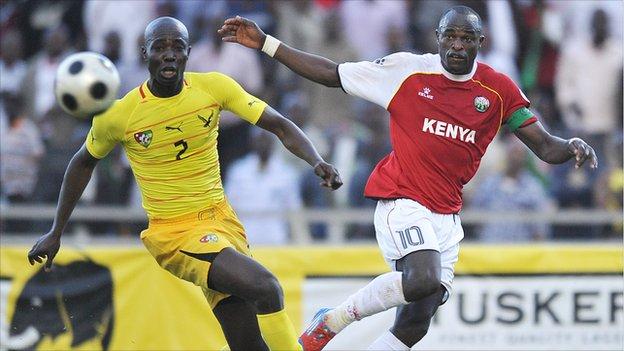 Kenya captain Dennis Oliech may face punishment from Fifa for pulling out of the squad to face Togo in a 2013 Africa Cup of Nations qualifier on 16 June.

Oliech, who plays his club football for French side Auxerre, is boycotting the match over money he feels he is owed from the use of his picture by sponsors of the local federation in a billboard advertisement.

This is disputed by the sponsors and the Football Kenya Federation.

Fifa have said the player is liable for disciplinary action because "every player registered with a club is obliged to respond affirmatively when called up by the association he is eligible to represent on the basis of his nationality to play for one of its representative teams".

Fifa's director of legal affairs, Marco Villiger, continued in a statement to FKF: "Violations of the provisions set forth in Annexe 1 of the FIFA rule may lead to the imposition of disciplinary measures."

While Oliech believes he is entitled to payment, the sponsors, East African Breweries Limited, and the FKF have said the terms of the player's sponsorship did not include that provision.

"The contract allowed the sponsors to use the national team pictures for promotional purposes. But we are now renegotiating to come up with a win-win situation for the players and the sponsors," said FKF Chairman Sam Nyamweya.

Meanwhile, another of Kenya's top players, MacDonald Mariga, who plays for Italian Serie A side Parma, has fallen out with the KFK over the unpaid reimbursement of more than $12,000 for air travel he used to join up with the national side.