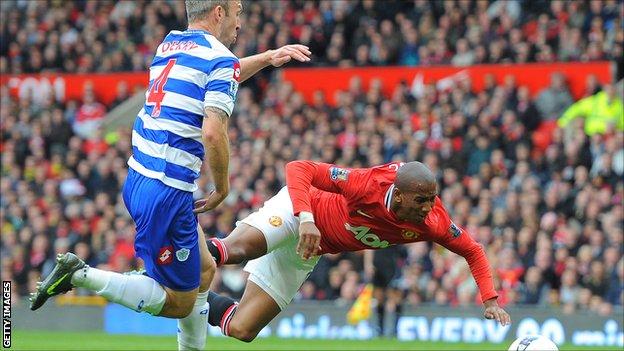 Manchester United manager Sir Alex Ferguson says he has spoken to Ashley Young after allegations of diving were levelled at the winger.

Young was criticised in some quarters over his involvement in penalties awarded against QPR and Aston Villa.

"I've had a word with Ashley," said Ferguson. "He understands where we come from and I hope it makes a difference."

But he also said the press had overreacted to the incidents "because it's Manchester United".

Ferguson admitted he thought to earn a spot-kick against Villa on Sunday, although he said referee Mark Halsey was correct to award a penalty.

That incident came a week after QPR captain Shaun Derry was sent off by Lee Mason for a challenge on Young inside the box, a decision and his after

The incidents led to former United captain Bryan Robson suggesting Young could develop a reputation as "a diver".

Robson, who spent 13 years with United and is now an ambassador at Old Trafford, believes Young need to be careful his reputation is not damaged.

He told BBC Radio Manchester: "He's going to have to be careful because people are scrutinising it now.

"The thing is, it could be in a really important game where there's a blatant penalty and he'll not get it because he gets a reputation for the diving."

"He's a sensible lad and he'll stand there, look in the mirror and think 'I've got to be a bit more careful and stay on my feet a little bit'."

But while Ferguson admits to speaking to Young, he believes the winger's behaviour is not as big an issue as has been reported.

"I watched Real Madrid against Bayern Munich the other night - it was ridiculous, with players diving and rolling about," he said.

"It was nothing like approaching what Young's been accused of and the way the press has reacted, because it's Manchester United."

Former United goalkeeper Alex Stepney believes diving will remain part of football unless the authorities clamp down on offenders.

"There are players in every team that do it," Stepney, who played more than 500 times for the Red Devils between 1966 and 1978, told BBC Radio Manchester's Red Wednesday programme.

"The only people that can stop it are the referee, the Premier League and the FA.

"They have got to put strong punishments for diving and the only way you can do that at the time is by video.

"The way they're doing it is not riding the tackle. They're throwing their feet into the other player to get the penalty.

"If any player did that in our day, they would have got seen to."