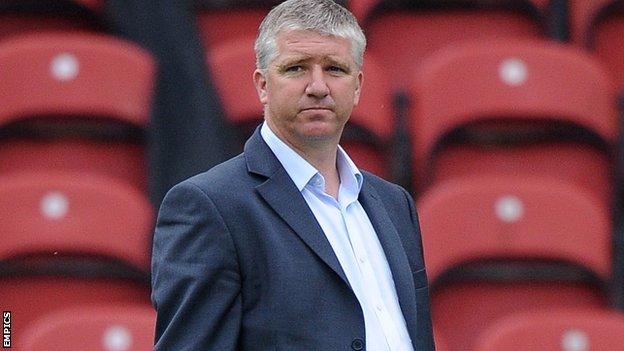 Torquay boss Martin Ling expects the last promotion spot to be a "shoot-out" between the Gulls and Crawley Town.

The two sides are locked together on 80 points in League Two, but Crawley occupy third place on goal difference.

"I think Shrewsbury and Swindon have flown the nest and it'll be a straight shoot-out between us and Crawley," Ling told BBC Radio Devon.

"We now know we've got to get more points than Crawley over a three-game game period," he added.

Ling's side have drawn their last two matches against Oxford United and Southend United, while Crawley have taken four points from their last two fixtures.

And that form means Ling feels Crawley are favourites to go up.

"We're probably 60-40 against as we sit here today but that's not bad odds between now and the rest of the season.

"We had a superb March and a half-decent start to April and we've actually gone down the league so it proves there are other teams that are performing to higher standards."

But Ling says he would be surprised if his side did not go up if they won all their remaining three matches.

"I would guess that 89 points has always gone up and in the past 89 has won the Championship.

"So if we got 89 and didn't go up we'd be very disappointed, but who knows, if we both win three games it'll be the first time ever that 89 doesn't go up."