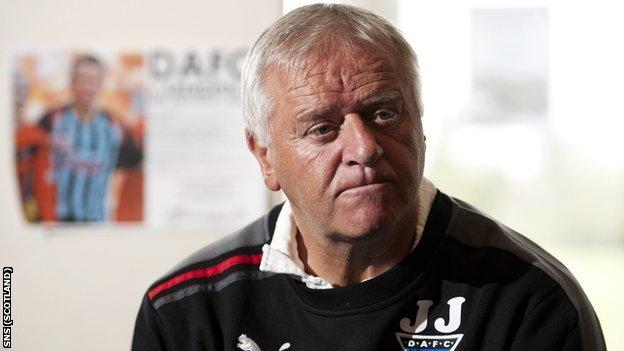 Dunfermline manager Jim Jefferies believes his side must beat St Mirren on Saturday to stand "any realistic chance" of avoiding relegation.

The Pars are seven points adrift of Hibernian at the bottom of the Scottish Premier League with five games left.

"It's crucial," said Jefferies. "What we need is a win and for Hibs to lose.

"If we don't win it and even if Hibs don't win their game, it's a big advantage for Hibs, because it's another game out of the way."

Jefferies is still waiting for his first win as Dunfermline boss, having taken just one point from three matches in charge.

"We're favourites to go down so the pressure should be off a little bit," he said.

"We've got to make sure everyone here believes we've still got a chance and while it's mathematically possible you've got to go for it.

"But we have to win on Saturday.

"People say Hibs minds may be on the [Scottish] Cup but I don't think so.

"Credit has to go top them for reaching the final given the season they have had. It will give them a boost and confidence and they will all be pushing for places in the final."

Meanwhile, Jefferies has left the door open for another link-up with Kevin Kyle.

Jefferies signed Kyle for Kilmarnock and then Hearts but the striker has since left the latter club as he recovers from a long-term hip injury.

"Kevin's got to concentrate on getting himself fit for the new season," Jefferies added.

"There has been some suggestion that he might have a deal with Hearts to try to go back there.

"I said to him if it doesn't work out then he could come and train here. That's all it was."