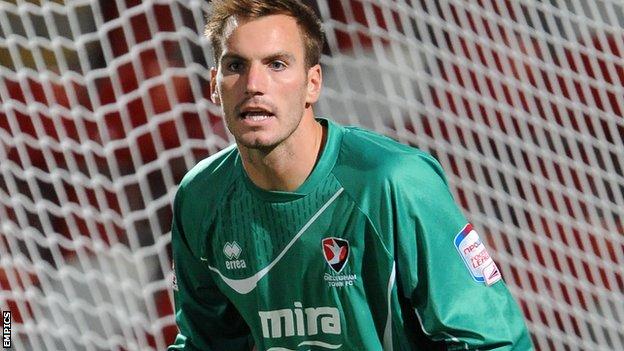 Scott Brown says he is ready to reclaim the number one jersey at Cheltenham.

The 26-year-old keeper played 107 consecutive games before the arrival of England Under-21 shotstopper Jack Butland, on loan from Birmingham City.

Butland has now been recalled by the Blues following an injury to Boaz Myhill, meaning Brown will return between the sticks against Crewe.

"It's not the way you want to get your place back but you've got to take it," Brown told BBC Gloucestershire.

"It's difficult when you're sat there on a Saturday afternoon feeling like you're not earning your money but all you've got to do is keep working hard.

"Hopefully I've kept myself as ready as possible so that when my chance comes along I'll be able to take it."

Butland, who has made the shortlist for Team GB's squad at London 2012, conceded just nine goals in 12 games during his first spell at Whaddon Road and played a major part in their push for the promotion spots.

He returned to the club in February but had a less successful 12-game stint - letting in 17 goals.

And Brown said that latest record eased the pressure on him, adding: "It's not like I'm a young kid coming back into the team.

"Earlier in the season we were keeping a lot of clean sheets under Jack and I felt more pressure to keep clean sheets. But this time they've not been keeping as many so there's not as much pressure."

Brown will make his return on Saturday against promotion rivals Crewe, knowing a win will secure them a play-off place.

In the same fixture last season, the Robins were thrashed 8-1 and Brown admits: "For those of us that played, it was one of the worst days of our football careers.

"Even if we win on Saturday, we'll never forget it because it was one of the worst days in the clubs history.

"We can only go there and get revenge but it won't make up for anything that happened last year, that's for sure.

"All the incentives are there if we can go and show our experience. If we do win then we'll be guaranteed a play-off place and we can look forward to the last two games."