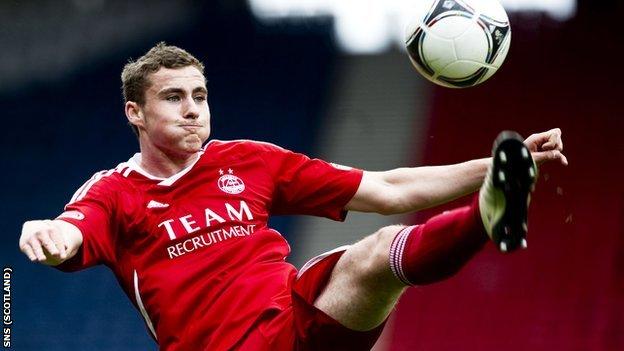 Aberdeen defender Clark Robertson's season could be over after manager Craig Brown revealed the full-back has "quite a severe looking knee injury".

The 18-year-old was injured in training and has been withdrawn from the Scotland Under-21 squad for the upcoming friendly against Italy.

Robertson has also been ruled out of the Dons' weekend trip to Inverness.

"Knees and ankles are very awkward but he has been in the past a quick healer," Brown told the club's website.

He will be ready for next season

"We will have to wait for a day or two until the medical staff have had a chance to assess it properly but it was very painful for Clark in training.

"It's a major disappointment for the lad because he has been playing well and had been called up to the Scotland Under-21 squad.

"I had to phone [Scotland Under-21 coach] Billy Stark and break the sad news to him and Billy indicated that he was to make his under-21 debut against Italy.

"He is a young, fit guy but the knee is quite badly swollen and damaged. It may take a day or two until it calms down and he can have a scan but that's the nature of the injury.

"He will be ready for next season, that's for sure and he will be a better player next year and we look forward to seeing the young full-back in the Aberdeen team."