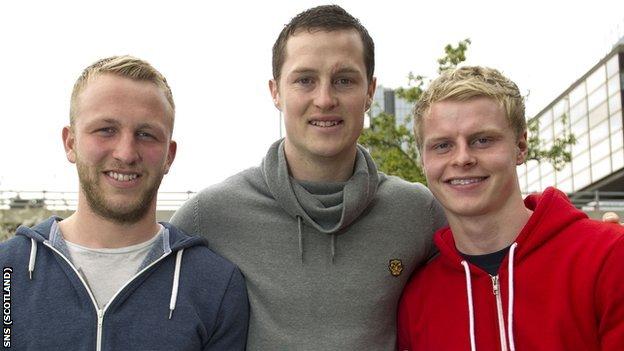 Dundee United striker Jon Daly insists he would rather clinch third place in the Scottish Premier League than finish as top scorer.

Daly and Celtic frontman Gary Hooper are currently top of the league's scoring charts with 18 goals.

"It's a possibility. Six points behind with 15 to play for; it's going to be tough. We need teams to do us favours."

I love it at Dundee United. The boys have been fantastic. I can only thank them, really

With second-place Rangers' participation in Europe next season in doubt, the team finishing behind the Ibrox side, should they finish second, could secure a Champions League qualifying spot.

"The chance of playing in a Champions League qualifier or even going to the Champions League, that's just something that doesn't happen at Dundee United," said Daly. "I'd much rather that than the golden boot.

"At the moment we're focussed on the Europa League and trying to get into that.

"We play Motherwell in the last game of the season so if it came to a shoot-out for the Champions League, that'd be great."

Daly joined United in January 2007 and this season's tally of 21 goals is his best so far with the Tangerines.

"I think I've had quite a good season, scored quite a few goals but I'd partly put that down to the service I've got into the box from the likes of Gary Mackay-Steven, Paul Dixon and Willo Flood," Daly said.

"The boys have been fantastic. I can only thank them, really.

"A lot of my other seasons have been hampered with injuries. Since I've come up here I've had three major injuries. This season's really the first proper season I've had without being injured.

"I love it at Dundee United."

Mackay-Steven and team-mate Johnny Russell have both been nominated for the young player of the year award and Daly believes there is enough emerging talent at Tannadice to replace the duo if they are prised from Tayside.

"I was surprised at my nomination but I wasn't surprised at the two boys," added Daly. "I thought they'd be shoe-ins for this year, they've been fantastic.

"We've got plenty of young boys on the conveyor belt coming through the ranks.

"If they do move on, good luck to them and hopefully we can get the next Gary Mackay-Steven and the next Johnny Russell to come through.

"We have plenty of young boys at the moment that are champing at the bit to get a run-out. Ryan Dow has found himself very unfortunate not to play many games this year, he's a fantastic talent. He could step in."