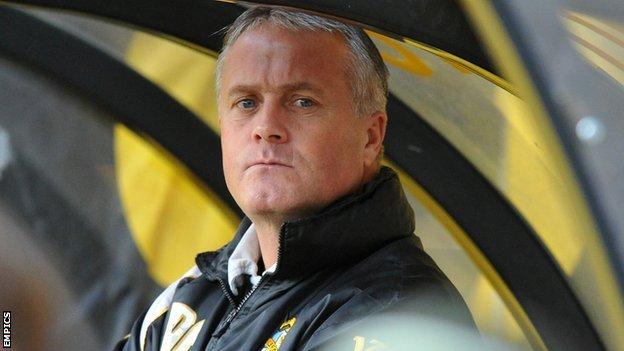 The two have already discussed a plan for next season in the hope that Ryder's proposed takeover goes ahead.

"He's a personable man. He's got no airs and graces about himself, he wants very much to stay out of the limelight," Adams told BBC Radio Stoke.

"He doesn't want to interfere on the footballing side of things so he sounds like the ideal chairman to me."

Ryder revealed earlier in the week that he plans to offer Adams financial backing to attract new players and renew the contracts of existing staff.

And the former Sheffield United manager spoke of the importance of that support.

"To be successful at any level you need the product on the pitch to be at its best," he continued.

"Generally at this level the more money you pay in terms of wages the better players you get and the more success you get, but that doesn't always follow.

"For example, Northampton Town have had a massive budget this season and they've not had a good season, but Swindon Town have got the biggest budget in the league (and they are top).

"Providing the judgement of the manager is OK and everybody trusts in that, generally I have found that the teams with the bigger budgets are there or thereabouts come the end of the season."

Had it not been for the 10-point penalty handed out to the Vale after going into administration, they would currently occupy 10th place and hold out faint hopes of making the play-offs - instead they currently lie 15th in League Two.