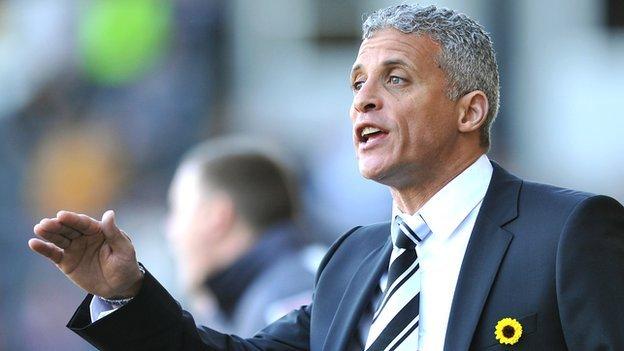 Notts County manager Keith Curle admits he was worried about the reception he would get when he took over in February but feels the fans are now behind him.

Curle has guided Notts to sixth spot in League Two and their play-off fate is in their own hands.

He told BBC Radio Nottingham: "All I've wanted is an opportunity to get people on board and I think that is happening.

"I was nervous. I thought this would be a trying time. I had to get the fans on my side and get them to believe in me."

Notts were in 11th place in the table and eight points adrift of the top-six when Curle was appointed.

But a run of eight wins and three draws from his 13 games in charge means the Magpies are now in pole position to finish sixth.

Huddersfield and MK Dons both have 74 points - seven ahead of Notts [67] - and seem unlikely to be caught.

That leaves four teams still in the hunt for the last remaining play-off spot and Notts are one point ahead of both Stevenage and Carlisle, and three points ahead of Brentford.

And while Curle admits to being nervous over the fans' reaction, he said gaining the support of the players was never a concern.

"The changing room is easy because I can have one-to-one contact with people and have direct contact with the players," he added.

"But the supporters would be watching from afar and would be thinking 'what's this lad all about?'.

You can hear live commentary of Notts County against Bury [kick off 1230 BST] on BBC Radio Nottingham on 103.8FM, 95.5FM Digital Radio and AM.