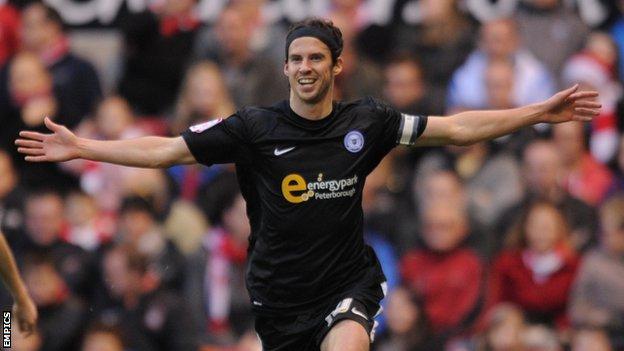 Peterborough midfielder George Boyd has said he will not demand to leave Posh this summer, but will see out his contract should he remain next season.

The 26-year-old has been told he will be transfer-listed after turning down the offer of a new deal.

He told BBC Radio Cambridgeshire: "I've not asked to be put on the transfer list, I think that's the club policy.

"If nothing comes along I'll be happy to see out my final year, so it's definitely in the club's hands."

Boyd looked set to leave Posh in March 2010, when he joined Nottingham Forest on loan. But the midfielder did not win over the former European Champions and returned to London Road having scored once in six games.

He added: "I don't know what's going to happen in the summer. If someone comes in it's up to the club if they let me go or not."

Posh are keen to cash in on the playmaker, who has 64 goals in 261 games for the Championship side, rather than lose him for nothing when his current deal expires in 13 months' time.

And that could mean he will make his final Peterborough appearance in front of the London Road faithful in Saturday's visit of Watford.

Regardless of whether that occurs, Boyd is keen to extol the virtues of manager Darren Ferguson, who has led Posh to three promotions across two spells at the club.

"He's been the biggest influence of my career. He's brought me on leaps and bounds and I wouldn't be the player I am without Darren," he said.

"When he left first time we took for granted how much he did for the club. In fairness, it was a bit of a shambles when he did leave.

"He brings togetherness and instils confidence into the boys."