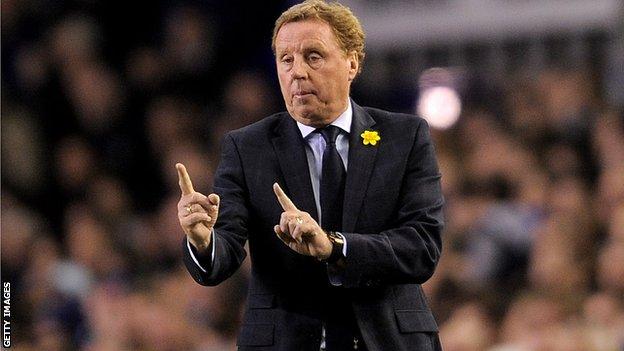 Tottenham manager Harry Redknapp still believes his side are on course to finish in the top four and earn a place in next season's Champions League.

Spurs lost heavily on Sunday to a Chelsea side who are battling them for a Champions League qualification spot.

But Redknapp said: "We were all very low after Sunday, myself included, but we've got five massive games coming up.

"It's still there. It's possible. I still feel we'll make Champions League football."

Meanwhile, Redknapp confirmed that midfielder Niko Kranjcar has been ruled out for the rest of the season.

The Croatian will not feature in Tottenham's final Premier League fixtures after sustaining a knee injury in Tottenham's 5-1 FA Cup semi-final defeat to Chelsea.

Tottenham are in fourth position in the Premier League, level on 59 points with Newcastle who lie in fifth spot.

But Spurs have been on a poor run of form recently, winning only one of their last eight league matches.

However Redknapp says his side can turn around their recent fortunes: "We need to be positive because we've got a tough game at QPR on Saturday. They're playing very well at home, I saw them beat Arsenal, they beat Liverpool and beat Swansea quite comfortably too. We'll have to work hard for a result.

"We've got to go again now and think about winning all our remaining games if we can. That's where we're at. It's all to play for."

He added: "I can see there's one or two areas where we haven't been as strong as we were previously. I think it's cost us a little bit. But it's no good keeping on looking back, we've got to look forward now.

"One or two of the players are tired and have not been at their best. We also lost a few key players at key points. But hopefully we can pick up a good result tomorrow and achieve a good finish.

"As I've said many times, to be where we are at this stage of the season, even sitting in fourth spot - we would have been happy. We've got nothing to be down about.

"We've played some great football this season and we're still bang in there."